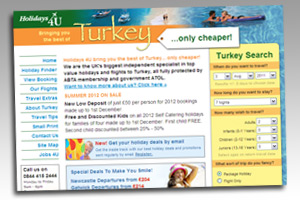 The director of Turkey specialist Holidays 4U has blamed its failure on a lack of cashflow after it was required to provide guarantees to the value of £4.5 million to renew its Atol in March this year.

Speaking exclusively to Travel Weekly, Holidays 4U director Mete Faks said the operator found it increasingly difficult to weather tough trading in May, June and July because of the Civil Aviation Authority’s (CAA) requirements.

Its cashflow was also affected by Barclaycard Merchant Services putting the operator on a 45-day deferral scheme for payments.

“People are asking, why did this company go bust in August?” said Faks.

“If we had that cash we would still be trading, and I wouldn’t be having this interview right now.

Faks said requirements from the regulator and credit card companies made it difficult for specialist operators to survive in the current market.

“Turkey has gone the same way as the Greek market,” he added.

“There used to be masses of independent Greek operators, now there are very few. It is hard to survive with the regulatory burden and the big two becoming stronger and stronger.”

Cosmos and Wings Abroad both added capacity to Turkey this week as customers hurried to rebook their summer holidays.

Chris Mansell, marketing manager at Wings Abroad, said: “The sudden extra demand from agents had to be catered for and, having had to trim back capacity earlier in the year, this unexpected number of requests for holidays is welcome.”

Eighteen staff at Brighton-based Holidays 4U lost their jobs when the operator failed. More than 130 people have joined a Facebook group to help former Holidays 4U sales and marketing manager Joe Lavers find a job.