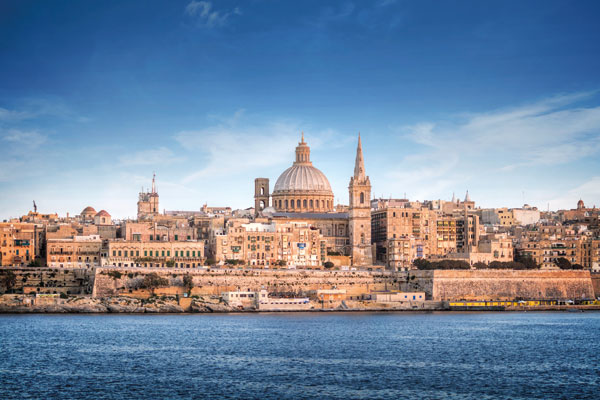 Malta has reopened to British tourists, and it all feels pleasingly familiar, finds David Golledge.

Having ventured little farther than my local high street for nearly four months, I have to admit I was feeling a bit apprehensive at the thought of flying anywhere, even by mid-July. Since March, the idea of travel had transformed from being second nature to something quite alien.

But any doubts were allayed as soon as I arrived in Malta, thanks to warm welcomes from my taxi driver, hotel receptionist and tour guide, warmer even than the Mediterranean island’s balmy temperatures.

All seemed raring to catch up on lost time, with each telling me that I was their first British guest since lockdown. I’ve been to a few obscure places before, but it seemed odd to be blazing a trail by visiting Malta in July – especially as I’d been before and knew the importance of the British market. 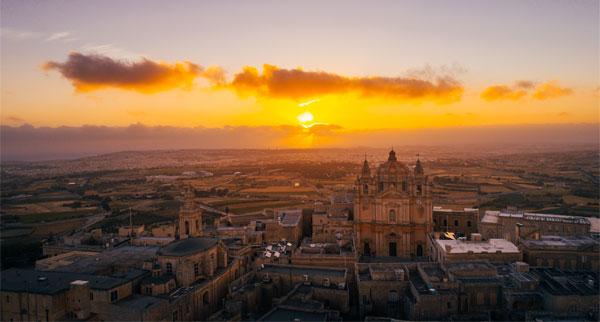 As soon as we arrived in the capital, Valletta, the city felt just as captivating as I remembered – streets lined with honey-coloured sandstone buildings bathed in glorious sunshine and awash with historic charm.

Given the upheaval of recent months, the strange thing was just how normal it felt, with many locals going about their daily lives. Local guide Darrell told me that since reopening for tourism at the beginning of July, the country had seen a smattering of visitors, mostly from Germany and Italy. “British visitors should expect a warm welcome,” he added.

The island feels like a melting pot of languages and cultures, blending British, Italian and North African influences. Road signs, red telephone boxes and postboxes will look familiar to UK visitors, having remained ever since the former colony gained its independence in 1964. We popped into local institution Caffe Cordina, which dates back to 1837 and serves the traditional local pastry pastizzi with a choice of mushy peas or ricotta.

“We popped into local institution Caffe Cordina, which dates back to 1837 and serves the traditional local pastry pastizzi with a choice of mushy peas or ricotta.”

Valletta was originally built to house the order of the Knights of St John, and their presence seems to extend throughout the tiny city. Despite appearing rather nondescript from the outside, the baroque interior of St John’s Co-Cathedral could not be more different. Its stone walls are engraved and inlaid with 24-carat gold, while the painted ceiling is quite literally a work of art, and worth clambering up the tall spiral stairs for a closer view.

Just a short stroll away, the Upper Barrakka Gardens feature rare greenery and striking arches, but the star attraction is the panoramic view across the wide expanse of the Grand Harbour. The terrace overlooks ceremonial cannons with a backdrop of billionaires’ mega-yachts and fortifications rising from the prongs of Vittoriosa and Senglea, two of the neighbouring Three Cities. 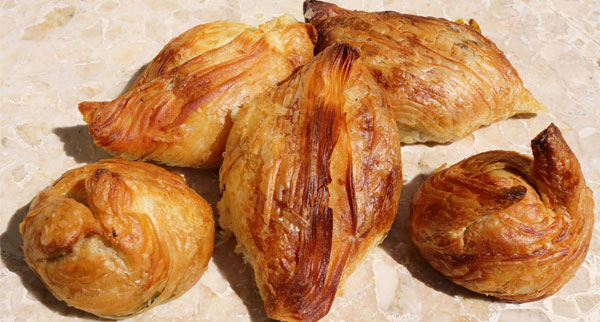 During the Second World War, Malta was one of the most heavily bombed places on Earth. The harbour bore the brunt, making this pristine view over the city’s medieval fortifications all the more remarkable.

For a different angle, head out on a dgħajsa, the traditional ferry boats painted in bright colours. Originally rowing boats, these days motors do the work and will zip you across the harbour to Vittoriosa in a few minutes for €2.

“Upper Barrakka Gardens feature rare greenery and striking arches, but the star attraction is the panoramic view across the wide expanse of the Grand Harbour.”

Normally, Valletta’s Grand Harbour is popular with cruise visitors, with summer bringing in around three ships a day and many of their thousands of passengers accessing the city via the 58m-high Upper Barrakka Lift.

It was similarly quiet when we visited Mdina, a medieval hilltop fortress familiar to Game of Thrones fans. Narrow old streets that would normally be thronged saw only a trickle of visitors. “It’s great to come over without all the hustle and bustle of queueing for attractions,” said Darrell.

Flights have restarted with British Airways, Ryanair, easyJet and AirMalta. 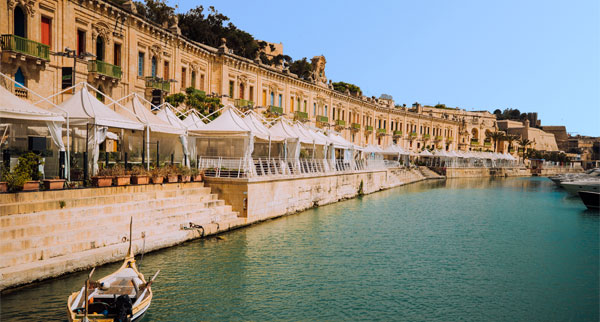 With fewer tourists to dodge, it was a good time to have a go at some outdoor activities, starting with a Segway tour to the island’s highest point, the Dingli Cliffs. As Malta is well-developed, it made a refreshing change to start our adventure from the lush greenery of the Buskett Gardens.

The machines are controlled by shifting your body position and it took no time to get the hang of darting around, the fat tyres making light work of any bumpy surfaces – although leaning forward while travelling uphill proved easier said than done as it got pretty steep in places. Reassuringly, the road is set well back from the edge, although my eyes remained fixed on the way ahead.

“With fewer tourists to dodge, it was a good time to have a go at some outdoor activities, starting with a Segway tour to the island’s highest point, the Dingli Cliffs.”

A quick stop gave the chance to take in the dramatic clifftop view out to sea. This whole area used to be a training ground for the Royal Marines, with distant island Filfla three miles out to sea a target for shelling practice.

After seeing this rugged coastline from above, it was time to get closer – and it would be hard to get any nearer than in a kayak. The single-seat craft proved surprisingly easy to control, and when the wind picked up, the current made paddling light work.

When confronted by rocks, the trick seemed to be to jab the paddle in the water backwards on one side and spin in a tight circle. It felt great on the rare occasion of catching a wave, especially as the glimmer of the bright sun illuminated the choppy water with an electric blue. 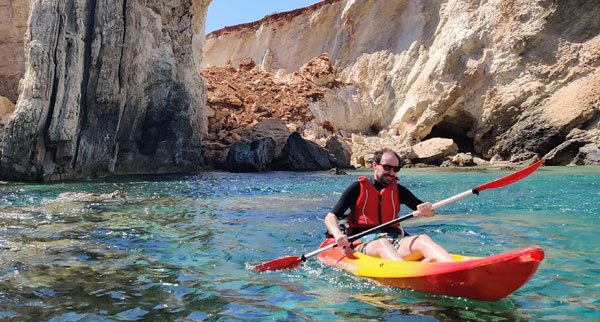 A little farther around the coast, protected coves had an altogether different look, with radiant turquoise waters contrasting with the deep azure further out.

You can explore caves within the cliffs, where the only source of light reflects in from under the still waters, giving a truly other-worldly glow. In nearly two hours, we encountered just one swimmer, so travelling now means you get to see things that you just wouldn’t otherwise encounter.

“A little farther around the coast, protected coves had an altogether different look, with radiant turquoise waters contrasting with the deep azure further out.”

The islands are a divers’ playground, owing to the number of Second World War wrecks accessible around the coast, while stand-up paddleboarding, surfing and climbing are also alternative active options.

All in all, it seemed to me that after months in lockdown, the sea shimmered that bit more radiantly blue, Valletta was that bit more enticing to explore, and hotel and restaurant staff that bit more excited to see us, as the crowds we so often complain about were nowhere to be seen. Hopefully, as the world gradually comes back, travel won’t be taken for granted. 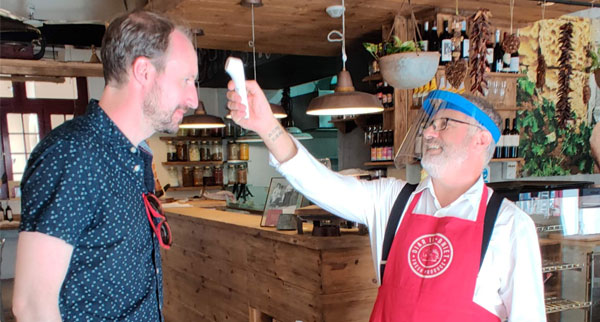 • Travel during the ‘new normal’ involved some adjustments. Face masks were required in airports and on flights, and there were frequent reminders via floor stickers and Tannoy announcements to respect social distancing and hygiene rules.

• On departure from Luton airport, many shops and bars had yet to reopen and inflight services were more limited than normal.

• The outbound flight was nearly full and on arrival, some passengers seemed to be on autopilot, filling up the aisle in a rush to disembark.

“Face masks were required in airports and on flights, and there were frequent reminders to respect social distancing and hygiene rules.”

• Visitors must fill in a contact tracing form. It was unfortunate to see some passengers crowding around tables to complete theirs, but this could be avoided.

• On return to the UK, holidaymakers must also fill in a form, which can be done online within 48 hours of departure. 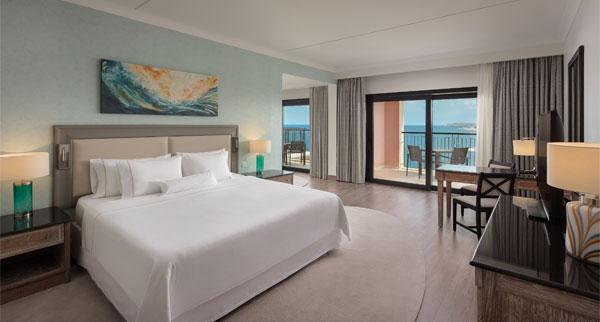 The Westin Dragonara is an oasis in bustling St Julian’s, situated on a spacious natural peninsula, with many of its 412 rooms enjoying spectacular views.

The well-established property emerged from lockdown with a refreshed contemporary-style lobby bar, a new terrace and refurbished suites, thanks to a €40m renovation.

Guests can expect temperature checks on arrival, plenty of sanitiser stations and Perspex screens, and to see cleaners frequently disinfecting touchpoints such as lift buttons. If the rooms are a little sparse, it’s because non-essential items such as ironing boards and hairdryers have been removed, but are still available from reception.

Access restrictions make for a slightly longer walk to the pool and beach
terraces, but there is plenty of space for loungers around the shoreline, and a choice of waterfront restaurants, including an original 19th-century boathouse.

The hotel’s casino is housed in a former palace complete with ornate columns, plus there’s a dive centre on-site and the shops and nightlife of Paceville nearby.

Book it: Double rooms start at £190 per night with breakfast.
marriott.com 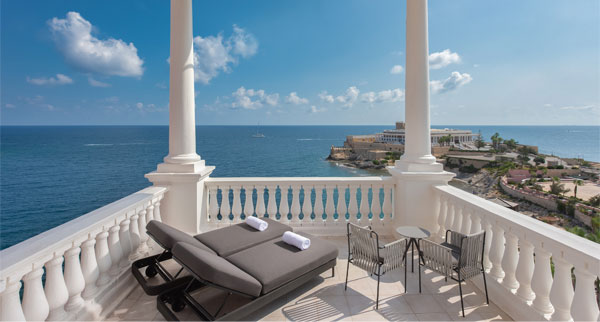 The Malta Tourism Authority is running agent webinars focusing on key themes, with introductory sessions followed by more-detailed Q&As with suppliers. Sign up at malta-training.com.

Maltese Islands
Introduction: May 7
Q&A: May 21

The best things to do in Malta beyond the tourist hotspots
Agent expert: Family holidays in Malta
Malta: Isle of MTV festival