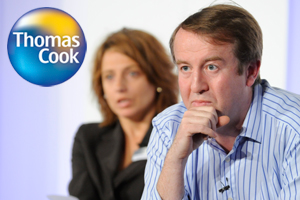 Thomas Cook head of mainstream Ian Ailles struck a conciliatory tone when accused by agents of poor standards of service at this weekend’s TTA Worldchoice in conference.

Conceding that the operator had not lived up to the standards it ought to aspire to he promised agents that they would be very much part of its distribution mix in the future and that it would sort out its problems.

Agents confronted him with complaints about product and accusations that Thomas Cook is increasingly impossible to deal with and undercutting them online. Chris Bailey, of Bailey’s travel, challenged Ailles to promise “an end to two-and-a-half hours waiting times to get through on the phone costing 10p a minute”.

Ailles said “yes”, adding Cook had to get to the root cause of the problems that were generating such calls from agents, and to make sure that phones were answered. “We are on a journey and we are trying to turn things round,” he said. “We know we have made errors in the past.”

Speaking to Travel Weekly after his presentation Ailles admitted that Thomas Cook “has lost touch with some of its core fundamentals”. “It is about getting back to doing some sensible things sensibly,” he added.

“It pains me to get some customer letters [of complaint]. We need to live up to our brand values. We have such a large number of areas to look at. I take the view no idea is a bad idea.”

During questioning Ailles was challenged by a delegate to trial offering agent partners rates to allow them to compete with Cook’s online pricing to see if that increased third party sales. Ailles did not rule that out.

He said although he had not seen the figures for the new Co-operative Travel joint-venture he envisaged Cook would be looking at achieving around 20% distribution through third parties.

For some non-mainstream product he said that figure would be “considerably more”. “We are very much open for business,” he told delegates. Cooks’s current level of controlled in-house distribution is thought to well below the 80% rival Tui Travel claims to be achieving.

Ailles said despite the three profit warnings Cook has been forced to issue which, prompted the departure of Chief Executive Manny Fontenla-Novoa, the firm would still make £320 million profit this year. He said divisions in other parts of the world like Scandinavia were trading well and it was the UK arm that needed turning around.

“We have worked pretty hard restructuring the management team after Manny and Ian (Derbyshire) left. There is no silver bullet. What we have got to do as an organisation is step up to the plate across a whole range of activities and that’s what you will see us doing in the next few months.

“We continue to have a strong commitment to the high street and see this as allowing us to have an interaction with the customer in a way you can never do online. We believe, and are very keen, to strengthen the knowledge and experience of the agent in interfacing with the customer.

Asked about Cook’s low share price, which at one point during the last month valued it at below the profit level forecast for this year, he said: “It’s ridiculous, but we are in a strange market and have a hugely volatile stock market.”