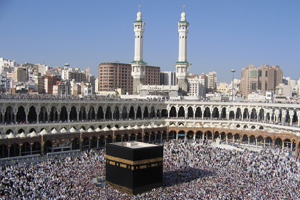 Hajj pilgrims from the UK are being warned about the dangers of booking with unlicensed travel companies.

Abta says people pay for travel arrangements for Hajj – which runs in Saudia Arabia until November 9 – that are sub-standard, or not provided at all, resulting in substantial financial losses.

City of London Police is so concerned about this problem that it has produced a leaflet for Hajj pilgrims giving sensible advice, but also encouraging victims of fraudulent traders to report the matter.

Only 10% of victims of Hajj fraud are estimated by the Association of British Hujajj (pilgrims) to report the crime. An estimated 25,000 pilgrims are due to travel from the UK this year, paying thousands of pounds for their trips.

But unlicensed traders are selling flights and accommodation packages without Atol protection. Without Atol cover there is no financial safety net if the trader fails or disappears with the money.

Additionally, if companies are not members of Abta, they are not policed by the association’s code of conduct to ensure high standards of service and reliability and would help to avoid the issue of customers being provided with substandard travel arrangements.

There are a number of court cases in Birmingham with defendants accused of purporting to be members of Abta, Atol and Iata where this was not necessarily the case, the association said.

Abta risk manager Steve Abrahamson said: “Every year the police and trading standards offices have to deal with cases of Hajj pilgrims who have lost substantial amounts of money or arrived in Saudi Arabia to find that their accommodation and other travel arrangements are of a much lower standard than they had paid for.

“For many Hajj is a once-in-a-lifetime trip and fraudsters don’t just steal pilgrims’ money but the opportunity to fulfil a religious duty.

“Whether you are offering a hajj trip or a holiday, the same laws apply and companies must have an Atol license when selling flights and accommodation as a package or act as an agent for a company that does.

“Hajj pilgrims should always look for Atol and Abta membership when booking. Also we would strongly encourage all victims of fraud or misrepresentation to go to trading standards offices or the police so that we can finally put a stop to this unscrupulous and dishonest practice.”

Hujjaj are encouraged to visit the Abta website or contact the CAA on 020 7453 6700 to check whether the company they are booking with is registered with either organisation.