Life is still sweet in Lake Garda, Venice and Verona, finds Katie McGonagle on a tour of northern Italy earlier this month.

The sun shimmered across the glassy surface of Lake Garda, dipping lower in the late-afternoon sky as the ferry puttered its way from southern town Sirmione to the western shores at Salò, interrupted only by a pair of paddleboarders sending out gentle ripples in their wake.

I took a moment to catch up on the news back in the UK: fears of another lockdown, one area after another falling subject to tighter restrictions, and my travel-focused Twitter feed full of tears, anger and frustration over the lack of support for the sector.

“The ferry puttered its way from southern town Sirmione to the western shores at Salò, interrupted only by a pair of paddleboarders sending out gentle ripples in their wake.”

It was so at odds with the peaceful scene in front of me. I wanted to reach into that Twitter timeline and share this moment of calm with all those friends and colleagues, to remind them that even amid a flurry of refunds and rebookings, scenes like this are what travel is really all about.

And if Italy, epicentre of the pandemic earlier in the year, can rebound with such positive energy – excitement over the return of tourism mixed with an impressive respect for Covid-related rules – then there’s hope for the travel industry yet. 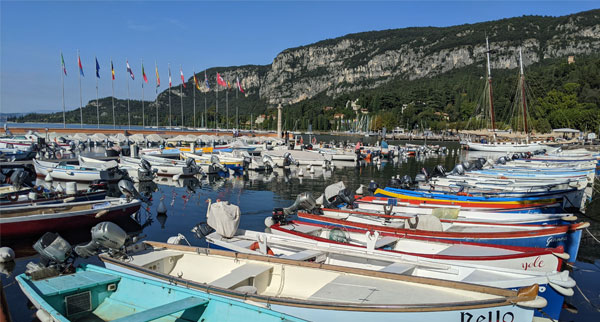 It would be hard to imagine a prettier spot than the shores of Lake Garda, where medieval fortresses and ancient stone walls stand guard over tiny waterfront towns, backed by the hulking shadows of sloping hills sweeping down to the lake.

No surprise, then, that this is one of Riviera Travel’s most popular destinations. In a typical year, its Lake Garda, Venice & Verona itinerary might have up to six departures, or nearly 300 passengers, running simultaneously. There were considerably fewer this year, though 13 Italy tours have departed since August, including three along this route, albeit with new safety measures in place.

“From our socially-distanced coach seats to common areas in hotels and restaurants, mask-wearing was ubiquitous, and quickly became second nature.”

Italy was a natural choice for Riviera to resume tours, given how meticulous the country has been about implementing new protocols. Everywhere I went, waiters, guides and local people wore face masks without fail, and tourists followed suit.

From our socially-distanced coach seats to common areas in hotels and restaurants, mask-wearing was ubiquitous, and quickly became second nature. While I can’t deny it was nice to take my mask off after wearing it for a while, this simple measure was a triflingly small price to pay for a much‑needed escape. 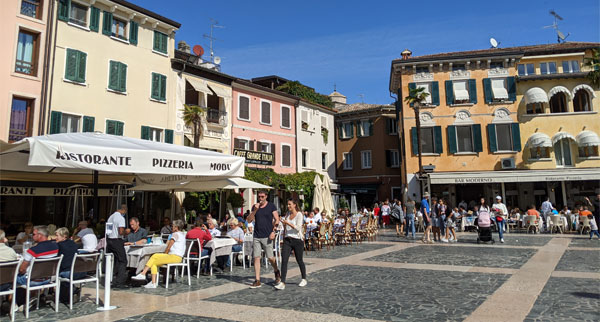 We stayed in Riva del Garda at the northern end of the lake, but spent a day exploring its perimeter, stopping off in Garda, a small waterfront town with just three main streets and a handful of medieval stone buildings, and Sirmione, a tiny spit jutting into the lake.

“Plenty of tourists milled through narrow streets – albeit fewer than usual, and with no British accents in earshot – and the restaurants were pleasantly buzzing.”

I’d anticipated empty piazzas and deserted cafes but it was not so. Plenty of tourists milled through narrow streets – albeit fewer than usual, and with no British accents in earshot – and the restaurants were pleasantly buzzing with visitors enjoying lunch in the sunshine.

Sirmione is a delight to wander around. Towered over by a 13th-century castle built by the once-dominant Scala family – of whom, more later – it is a launching point for ferry journeys across the lake. We sailed from there to Salò, home to the lake’s longest promenade and favoured by the Italian elite for their daily passeggiata, then drove back along the western shore past pretty terraces draped with lemon trees.

Visitors to Italy from the UK must show evidence of a negative Covid test within the previous 72 hours, or take a free test available on arrival at certain airports. 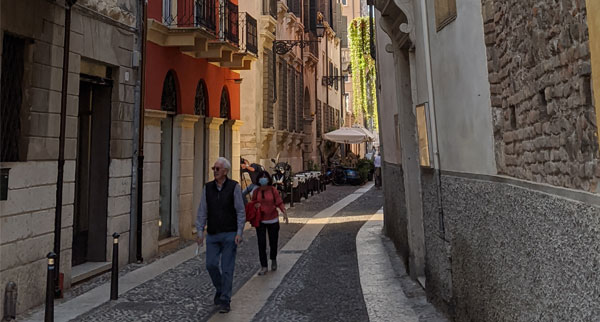 City breaks probably aren’t top of your clients’ wish lists right now, and perhaps understandably so. Yet having previously visited Venice and Verona, I can comfortably say that on this trip in late September to early October they were both at their best – just buzzing enough to give a sense of atmosphere, but with fewer queues and crowds so there was always plenty of space to spread out.

Venice was certainly quiet, even for late in the season, yet despite this the local guide for our Undiscovered Venice tour led us far away from the main tourist drags in search of all-but-deserted tiny squares and side streets.

“Yet having previously visited Venice and Verona, I can comfortably say that on this trip in late September to early October they were both at their best.”

The same was true in Verona, where we skipped the touristy Juliet’s Balcony (although the queue was shorter than ever) to stroll through the Unesco-listed old town in relative peace.

“Verona is so much more than Romeo and Juliet,” said tour manager Nicola Wood. “It has some of the best Roman ruins outside Rome, and it has the Scala family – two of the most important ages in Italian history.” 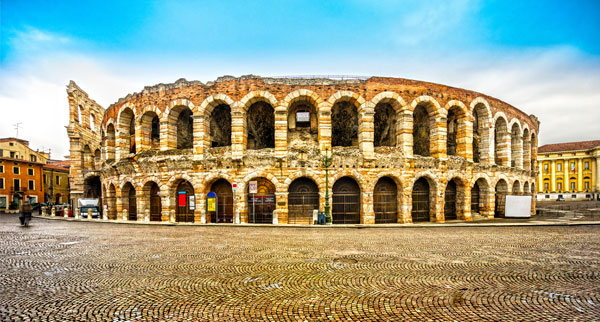 While our local guide told us a little of the real-life Montague and Cappello (not Capulet) families that inspired Shakespeare’s star-crossed lovers, the real story here lies in the shifting power struggles of the Scala family, which ruled over this region in the Middle Ages.

“Verona is so much more than Romeo and Juliet; it has some of the best Roman ruins outside Rome, and it has the Scala family – two of the most important ages in Italian history.”

A day trip is only enough to get a taste of this vibrant city, but recommend a stroll up the (many) steps of the Torre dei Lamberti – where a kaleidoscope of colourful buildings unfolds below – so clients can plot where they plan to visit on their next Italian adventure.

Book it: Riviera Travel’s eight-day Lake Garda, Venice & Verona tour departs from 11 UK airports and offers a choice of seven hotels in Riva del Garde and Malcesine. Prices start at £789 from Gatwick on October 18, 2021, or from £859 from Bristol on April 19. Upgrade to the Hotel Kristal Palace from £1,199; small-group departures are also available.
rivieratravel.co.uk

Riviera Travel has introduced a number of changes to ensure its tours operate safely. They include:

• Reducing maximum group sizes from 50 to 25, though still using 50-seat coaches to allow for social distancing.

• Requiring passengers to keep to the same seats on board rather than allowing for seat rotation.

• Wearing face masks on the coach and while walking as a group.

• Using hotels where buffet meals are served by staff to reduce touchpoints.

• Offering hand sanitiser every time guests board the coach and cleaning all surfaces regularly. 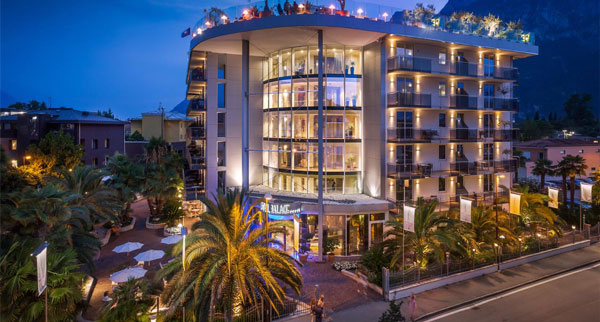 This modern, 58-room hotel in Riva del Garda merits its fourstar- superior rating, combining well-finished rooms featuring marble bathrooms with excellent four-course dinners and a pleasant lounge bar. Its real standout, though, is the roof terrace overlooking Lake Garda, with a heated pool and bar for evening drinks. The shuttle bus into town is not running at present, but guests can walk or cycle with free bike hire from the hotel.

Ask the operator: How to sell Italy for 2021
Must-visit neighbourhoods in the Berlin
What’s new in the escorted touring sector