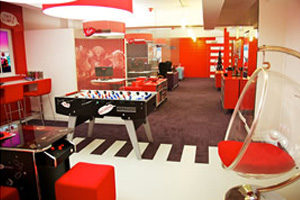 Virgin Holidays expects its new flagship London store will be profitable within six months of its grand opening this week.

The 1,800sq ft shop in High Street Kensington opened with typical Virgin flourish on Tuesday, with a procession of scantily clad ‘sunbathers’ braving the cold at the launch of the operator’s first permanent high street outlet.

Virgin already operates about 100 concessions within branches of House of Fraser, Debenhams and Tesco, as well as temporary pop-up stores, but the London shop is a first for the firm.

Speaking exclusively to Travel Weekly last week ahead of the opening, managing director Amanda Wills said she was excited by Virgin’s move onto the high street.

“This was an opportunity that just came along and we couldn’t say no,” she said. “It is a test, so we will see so how it goes but we expect it to be profitable within six months.” Wills denied the move was a threat to independent agents and insisted it was “a massive endorsement for selling travel on the high street”. She added: “We have to be in control of our own destiny.”

The store joins other prestigious travel retailers on High Street Kensington including Trailfinders and Kuoni. Wills said she was looking forward to the competition. “We think we have a head start in terms of the strength of the Virgin brand,” she said.

The two-floor shop will feature all Virgin products – including cruise, Hip Hotels and its upper-end Limited Edition range – and will encourage customers to browse at their leisure.

“People won’t come in and be confronted by banks of telephones,” Wills added. “We want this to be a great experience, like our V-Room airport lounges.”

The shop will employ six expert agent “gurus” and there will be a kids’ area, a video wall and devices such as iPads.