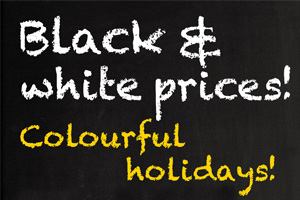 Cosmos launched its main 2012 brochures and marketing on Thursday with a new-look, black and white theme to emphasise “transparent pricing”.

Tour operations managing director Hugh Morgan said: “The branding will stand out in a sea of sameness. Our prices will be black and white.”

The company pledged to distribute twice as many brochures as normal to ensure no agent goes short in January. “We are out to support the retail trade. There will be no shortage,” said Morgan.

It also promised to drive customers to agents with “a range of exclusive offers”.

Morgan said: “We celebrated 50 years of selling through the trade this year and it has never been more important to affirm the security of fully-bonded packages and continued independence. That is what we offer.

“We’ve changed our brochures to extol our virtues. We offer huge flexibility – anything from two to 40 nights.”

The pair claimed Cosmos outperformed the market this summer despite losses at airline Monarch. Morgan said: “Cosmos traded 20% up year-on-year in a market that was at best flat or going backwards.”

Monarch Group announced a £75 million cash injection in November. Executive chairman Iain Rawlinson said: “We’ve had the benefit of refinancing and the platform it has given us. We are scoring well in an uncertain market and we are very optimistic.”

Morgan added: “Most operators will tell you it’s going to be a tough year, but the changes in our model mean we are confident.”