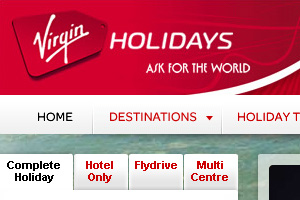 An incentive enabling travel agents to earn £10 per passenger – doubling to £20 for booking certain hotels – is a central plank to Virgin Holidays’ peak selling season push.

The operator’s Peak Sale kicks off tomorrow (December 22) across all brands and runs until the end of January.

Virgin Holidays welcomes back the Danke Schöns – the fictional group whose misadventures helped launch the concept of Rockstar Service – when it launches the campaign.

Agents will earn £10 for online and sales centre bookings when claimed at www.vhols4agents.com, which doubles to £20 per passenger for Walt Disney World hotels, Almond hotels and Virgin Holiday Exclusive hotels – the Sea Breeze, Savannah and Waves hotels in Barbados, and the Hilton Ras Al Khaimah in Dubai.

There will be a chance to win an iPad 2 each week from January 2 through the Virgin Holidays agent website.

TV adverts break on Boxing Day featuring the Danke Schöns, highlighting deals in key destinations such as Florida, the Caribbean and Dubai. The ads will run in a number of prime spots until mid-January.

These will be supported by display and classified press advertising, digital escalator panel spots in key London Underground stations, and email and direct mail activity throughout the month.

With more than 90 concessions and a standalone Virgin Holidays flagship store open in London, there is also a “significant focus” on retail, with window displays and in-store technology helping to promote the campaign’s messages.

Social media is being employed, giving Virgin Holidays’ Facebook community the chance to win a holiday by identifying where in the world Danny Danke Schön has gone AWOL to via an interactive map application and hotspot information.

The promotion ends with a radio campaign voiced by TV and radio personality Alex Zane.

Marketing director Andrew Shelton said: “January is a critical time for any holiday company, and this year competition for consumers’ attention is going to be keener than ever.

“We wanted to deliver a campaign that plays to the strengths of what differentiates us in the market and really reminds the travelling public of all of the stuff only we can do – our Rockstar Service commitment.

“Equally, though, we know they want a great deal at this time of year. So this campaign is geared towards demonstrating that you can have the best of both worlds – rockstar treatment without a rockstar price tag!

“We’re delighted to see the return of Danny and the Danke Schöns, and we know the public enjoy following their adventures.”