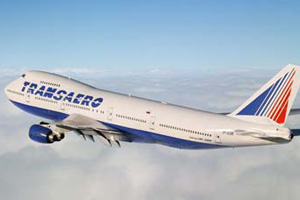 Transaero, which has a code share arrangement with SIA, has previously purchased B777-200 and B747-400 aircraft from the Asian carrier.

The Russian airline is also discussing a possible purchase of the aircraft from other owners and is likely to confirm a deal to buy four Airbus A380 superjumbos by the spring.

Transaero expects to add 16 aircraft to its fleet of 78 aircraft in 2012 after adding 17 last year.

“We have put a deposit on those (A380) aircraft. We are going to firm up the contract this spring as we found that our financial partners are ready to finance the deal,” chief executive Olga Pleshakova told Dow Jones Newswires.

The company has also ordered four 787 Dreamliners and four 747-8 jets from Boeing.

Transaero expects to receive its first Dreamliner in 2014, the first A380 in 2015 and the first 747-8 in the following year, said Pleshakova. The airline ordered eight Airbus A320neos last year with the first due to be delivered in 2017.