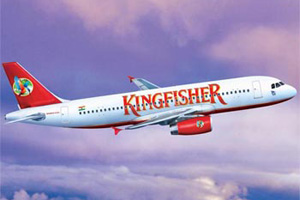 Kingfisher Airlines has submitted plans to Indian regulators to slash more than half its scheduled flying as it struggles to survive.

However, the Indian carrier told India’s civil aviation authority, the Directorate General of Civil Aviation, it will have 16 more aircraft available for operations this week after grounding almost two-thirds of its 64-strong fleet last week and cancelling large numbers of flights.

Kingfisher has pulled off some domestic routes and withdrawn part of its network in South East Asia, but continues to operate daily from Heathrow to Delhi and Mumbai.
Millionaire owner Vijay Mallya said last week: “Closing down is not an option. It will not happen.”

Reports in India suggest Mallya is reluctant to put more of his personal fortune into the airline. However, there were also reports at the weekend that two large Indian investors are considering taking stakes in the airline.

Kingfisher was poised to become a member of the Oneworld alliance of airlines, led by British Airways, next month. Its membership, sponsored by BA, has been indefinitely postponed. Kingfisher had been touted as a potential takeover target for BA-parent International Airlines Group.

The carrier announced losses of £57 million in the final quarter of last year, almost double a year earlier, but it is Kingfisher’s debt that is in danger of pulling it down.

However, the carrier’s troubles form part of a wider crisis in the Indian airline industry, where a high oil price has collided with a fares war triggered by wild over capacity.

The DGCA will begin reallocating Kingfisher Airlines’ unused slots this week amid expectations the regulator will struggle to find interested parties. The Economic Times of India quoted a DGCA official saying: “Kingfisher surrendered almost half its slots recently, but there weren’t many takers.”

The same report quoted an unnamed airline official who suggested most domestic routes lose money and an industry analyst who said: “There is a demand-supply mismatch. Much of the passenger traffic is concentrated among the top eight major city pairs.”

The Indian government recently announced two policy moves intended to ease the situation. It will relax rules prohibiting foreign control of Indian airlines and allow carriers to import their own oil, thereby evading the duty on jet fuel. However, both measures are expected to take time to implement.