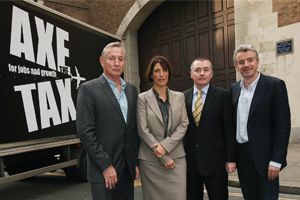 The UK and Ireland’s four leading airlines renewed their attack on Air Passenger Duty ahead of the March 21 budget with a warning that families will be priced out of flying.

British Airways’ parent IAG, easyJet, Ryanair and Virgin Atlantic called for the next rises in APD to be suspended.

They attacked Treasury plans to follow rises in APD from April 1 with further increases intended to grow revenue from the tax by 46% by 2016.

The increases would mean a family of four paying tax of £440 to fly economy-class to the Caribbean, and £500 to Australia. In 2005, a family of four travelling to any long-haul destination would have paid just £80.

A family of four in Scotland or Northern Ireland flying to see friends or relatives in England three times a year would have an APD bill of £420 against £120 in 2005.

The airlines’ chief executives, Carolyn McCall, Willie Walsh, Michael O’Leary and Steve Ridgway, said: “These endless cumulative increases in APD are pricing families out of flying – both from and to the UK. That means fewer visitors to the UK, which destroys jobs in our tourism, aviation and hospitality industries – and chokes off opportunities for young people at a time of exceptional youth unemployment.

“Civil Aviation Authority figures have confirmed this week that UK passenger numbers in 2011 were at the same level as in 2004. Seven years of rising taxes have brought seven years of no growth.

“Aviation wants to, and should be, playing a leading role in economic recovery – as it does in so many other countries. But the UK imposes the highest aviation taxes in the world, and keeps on increasing them without any analysis whatever of their overall economic impact. We are exporting economic growth, and jobs, to competitor countries. How much longer must this madness go on?

“We call on the Chancellor to suspend the April 1 rises in APD, and those planned up to 2016, while the Treasury commissions an independent study of the economic effects of this job-destroying tax.

“We are confident such a study would show that APD’s damage to economic activity outweighs the revenue obtained. It is irresponsible of the Treasury, if it is serious about pursuing economic growth, to keep piling on APD increases without conducting a study of this kind.”