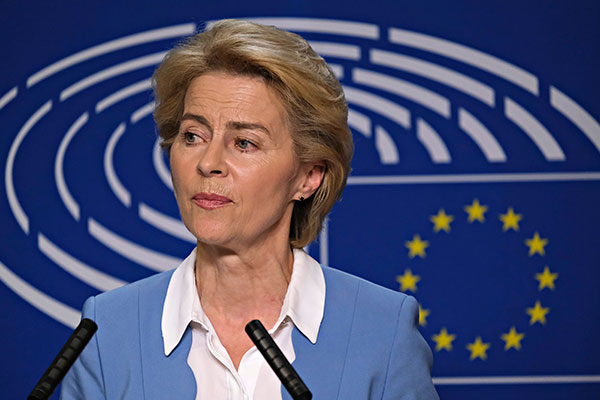 EU leaders have responded to demands for coordinated travel restrictions across Europe by advising against all but essential travel and toughening controls on visitors from outside the EU, including the UK.

The European Commission said all non-essential travel should be “strongly discouraged until the epidemiological situation has considerably improved”.

Speaking following an online summit of EU leaders, von der Leyen said: “We have to differentiate two issues. First, documentation of vaccination is a medical necessity and there is a global standard for this [the World Health Organization’s international certification].

“Second, what [do] you use this certificate for, [which] must be considered carefully? Does vaccination inhibit transmission of the virus by the vaccinated person? We have no answer.

“How long is the vaccination effective? We don’t know that either.

“How do you ensure the rights of those who have not had access to a vaccine and what alternatives do you offer those who have legitimate reasons for not getting the vaccine?

“How do we protect the personal data of citizens?”

Von der Leyen said: “When the time is right, we need a debate and a consensus on uses of the certificate.”

In the meantime, the EC recommended additional measures for those “travelling to the EU for essential reasons”, including mandatory PCR tests before departure “combined with self-isolation, quarantine and contact tracing as well as additional testing for up to 14 days”.

“Stricter measures” are proposed for trips originating from countries such as the UK where a variant has been detected. The EC also proposed updating measures for travel within the EU.

The commission agreed to coordinate travel restrictions across the EU last October but has so far had little impact on decisions by member states.

EU leaders did agree a new colour code for mapping risk areas, adding ‘dark red’ to indicate areas where the virus is at “very high levels” to the existing colours of green, orange, red and grey.

Despite the restrictions, Lufthansa Group chief executive Carsten Spohr said he expects “some recovery” this summer.

In an interview with European air traffic management body Eurocontrol, Spohr argued: “Somewhere between the second and third quarters, vaccines will come into play and testing is becoming more professionalised and will give us some recovery for the summer.”

However, Eurocontrol director-general Eamonn Brennan reported: “The situation has deteriorated considerably. We don’t expect to see any significant improvement [across Europe] until after Easter.”

Brennan highlighted “the inconsistency of government restrictions” and said: “There is a lot of uncertainty.”