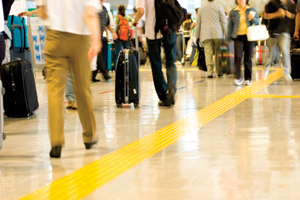 UK airports will be reduced to ‘gridlock’ over Easter due to a shortage of staff to carry out passport checks.

The reported warning from 11 airlines to home secretary Theresa May came ahead of one of the busiest travel weekends of the year with 1.5 million people expected to travel abroad.

British Air Transport Association chief executive Simon Buck has written to May on behalf of the airlines urging her to ensure passport controls are “properly resourced”.

A separate memo sent by Virgin Atlantic to the home affairs select committee warns that long queues at passport control could leave passengers stranded on aircraft and put the operation of “entire airports at risk,” the Daily Telegraph reported.

The leaked Virgin Atlantic memo warns that there is a “very real chance of gridlock at UK airports” over the Easter holidays. It says ministers have either to provide more staff, or to reinstate targeted checks on people coming from high risk areas instead of taking a blanket approach.

“If arriving passengers are unable to proceed efficiently through the UK border then the entire airport operation will be at risk,” the memo reportedly says. “Passengers arriving late from passport control to collect their luggage will cause congestion in the baggage hall, delaying delivery of luggage from later flights.

“If there is no space in the immigration hall for any more arrivals then airlines will be forced to keep passengers aboard the aircraft, thus jeopardising the operation of subsequent flights. This in turn will delay departing passengers and cause overcrowding in departure areas as a result.”

A Border Force spokesman told the newspaper: “We will not compromise border security but we always aim to keep disruption to a minimum. Carrying out full checks can mean queues at peak times while we ensure that only people entitled to enter the UK can do so.”