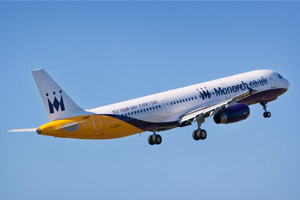 Monarch Airlines is to renew its fleet with more fuel-efficient aircraft as it expands its flying programme having added services to Italy this summer.

The carrier has leased two additional aircraft to double capacity at Birmingham and managing director Kevin George said it was looking to retire some of its older aircraft.

“Over the next two years we plan to phase out some of the aircraft that are less fuel-efficient. We are evaluating a replacement narrow-bodied aircraft.”

Monarch cancelled an order for six Boeing 787 Dreamliner long-haul aircraft last year having announced its change in strategy to become a short-haul scheduled carrier. It has 32 aircraft in its fleet.

George said the growth at Birmingham was a first step of planned expansion over the next few years.

The airline launched nine routes to Italy last week, after identifying the country as a destination that has been overlooked for leisure customers.

Monarch will fly to multiple bases including Venice, Verona, Rome and Milan from Manchester, Luton, Gatwick and Birmingham.

“We believe there is plenty of opportunity for growth in the UK market. There are modest signs of recovery in the south of the country, although not yet in the north but we expect to see that return in the next 18 months. We identified that the Italian market was underserved and offered potential.”

As well as the Italian routes, Monarch has also started scheduled services to Dubrovnik, Croatia, and Heraklion, Crete, previously served by charter flights.

The top three routes last month were to Tenerife, Alicante and Malaga. The monthly performance was boosted by the introduction of eight new routes to the Italian cities of Milan, Rome and Venice from a mix of four UK airports from March 25.