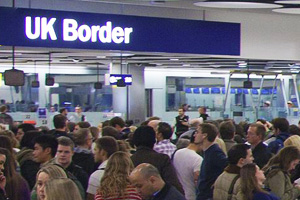 A combination of outmoded processes and inadequate staffing are to blame, says Mike Carrivick, chief executive of the Board of Airline Representatives in the UK (BAR UK). But there is a solution

The immigration queues air passengers must endure to enter the UK appear to be going from bad to worse, but at least the scale of the problem is now gaining wide awareness.

A queuing time of one hour or more is excessive for a holidaymaker, let alone those travelling on business. Reports of queues of three hours or more at Heathrow are beyond comprehension. This hardly constitutes a warm welcome to the UK.

The Board of Airline Representatives in the UK (BAR UK) represents more than 80 airlines and is justifiably concerned about the negative effects, not just on its members but on the travel industry and economy at large.

The queues damage the reputations of everyone, whether responsible or not, and are becoming a source of conflict at a time when we need to work together to deliver the airport experience we all expect.

The government’s stringent entry controls are supported by the airlines. However, we firmly believe improved technology can be used to process increasing numbers of travellers, while maintaining the highest standards of border security.

Rather than add to the chorus of blame, we feel it important to establish exactly where things have gone wrong and to work with the government to implement solutions with the urgency required.

So what has gone wrong? BAR UK’s view is that the current situation has arisen from a combination of traditional and outmoded processes, inadequate staffing and a lack of mobility between locations at larger airports.

Airlines and airports have embraced technology, such as advance passport details and online check-in, to improve the customer experience. The Border Force must be allowed to do the same, despite the budget cut-backs placed on it.

Without modernising processes and systems to reduce manual input, airports will be forced to build ever-larger immigration halls. Simply throwing money at the problem, without fundamental change, is not the way forward.

Any move to charge airlines for UK Border Agency staff would only create a reward for failure. However, additional resources are clearly required so modernisation has to be the route to take.

Airlines have been cooperating with government for several years through the e-Borders programme which provides advance access to the passport data of approximately 90 million travellers a year.

These records need to be checked against a watch list to identify those who pose a threat or who should not be in the UK.

Furthermore, in active collaboration with the Border Force’s Risk and Liaison Overseas Network (RALON), or through its Approved Gate Check (AGC) status, many travellers with incomplete border-entry documentation are already prevented from boarding flights to the UK.

With so much risk already taken out of the process, why are so many physical barriers then placed in the way of entry on arrival in the UK?

Airlines would like to see an increase in the number of smart gates, popular with EU nationals, which permit automated entry through the use of chip-enabled (biometric) passports. We also propose the re-introduction of smart zones, where feasible, which would benefit entire flights that have been passed fit for entry prior to departing for the UK.

Collectively, these steps can bring huge improvements to the experience of entering the UK without compromising the government’s need for stringency.

The airline community has a great record of cooperating with the UK border agencies and will continue doing so in order that the full potential of the e-Borders programme can be realised.

BAR UK calls upon the government to address the resourcing issues facing the Border Force and to invest in the technology and systems which will allow a far more efficient use of available information and resources.