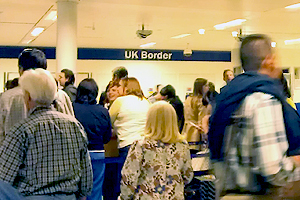 Green told MPs: “The queues are not acceptable. We are taking steps to tackle them. We need to continue getting a grip.”

However, airport operator BAA and senior figures at British Airways and Virgin Atlantic said the delays went back two years and had got worse.

BA operations director Andrew Lord agreed, saying: “It has been an issue for two years or more. There has been a severe deterioration over the last 12 months.”

The minister suggested part of the problem was due to airlines under-reporting passenger numbers at peak times.

On a visit to Heathrow last week, Green said he found Border Force staff had been told to expect 2,500 passengers at 6am on Monday. This then changed to 5,000 and, in the event, 7,500 arrived at Heathrow at 6am. Green said: “The more accurate the information we have, the more accurate we can be in staffing desks.”

However, Matthews said: “We know when passengers are due to arrive. The key issue is having the right number of desks manned at the right moment.”

Koster said: “The UK border force knows as much about our passengers as we do six-12 hours before their arrival. It’s possible to plan accordingly.”

Lord insisted: “The UK Border Force has better information on customers arriving into Heathrow Terminal 5 than anywhere in the UK, but there has been no improvement in the last year or first quarter of this year. There has been an improvement only in the last 10 days.”

Matthews reported that while BAA measures passport queues “every 15 minutes”, “the Border Force procedure is to measure every hour if the resources are available to take a measure”.

Green promised improvements, saying: “We will have 480 extra staff on duty for the Olympics. However, I’m conscious people are worried about the post-Olympics period, so we have brought forward recruitment of 70 new staff for Terminal 2 [due to open in 2014].”

He said provision of central control room and mobile teams of border staff to provide 24-hour cover at Heathrow would mark “a considerable step forward” when deployed in the next fortnight.

However, trade unions representing border staff accused the government of “costing taxpayers an inordinate amount of money” by flying in staff from all over the country “who are not even working a full shift”.

Abta chief executive Mark Tanzer told Travel Weekly: “The government has not got a grip on this at all. The problem seems to be spreading.”