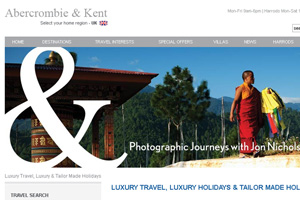 But pre-tax profits more than halved to £89,000 from £180,000 previously, according to accounts filed at Companies House.

Strong demand for luxury holidays in the Far East, South America, Africa and Europe helped the UK business offset a decline in sales to destinations in the Middle East, Japan and Thailand, which was hit by serious flooding last year.

The company said sales in the first five months of this year were up 7% on the same period in 2011 but raised concerns about the continued impact of geopolitical events on popular destinations such as Kenya.

Ian Coghlan, chief executive of travel at Abercrombie & Kent, said last year’s profits slump was due to some costs for the whole group, which is made up of 50 destination management companies, being booked through the UK division.

He told the Daily Telegraph that the top end of the travel market in both the UK and US was holding up well despite the economic squeeze but warned that French and Spanish households were cutting back on travel as a result of the eurozone crisis.

“We are having big struggles in France and Spain, where we are seeing quite large reductions in outbound traffic,” he said.