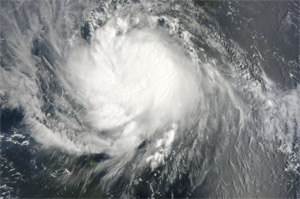 Flights and cruise schedules have been altered as Hurricane Sandy lashed Jamaica before heading north towards Cuba.

It was the first direct hit by the eye of a hurricane on Jamaica since Hurricane Gilbert 24 years ago.

Authorities closed the island’s international airports and police ordered 48-hour curfews in major towns to keep people off the streets and deter looting.

Cruise ships changed their itineraries to avoid the category one hurricane, which made landfall five miles east of the capital of Kingston bringing heavy rain and winds of up to 80 mph.

An elderly man is reported to have been crushed to death by stones that fell from a hillside as he tried to get into his house in a rural village. Hundreds of people have taken refuge in shelters.

Sandy has prompted a hurricane watch in the Bahamas, while Florida has been placed on tropical storm watch.

US National Hurricane Centre forecaster Michael Brennan told the BBC: “It’s a big storm and it’s going to grow in size after it leaves Cuba.”

The centre predicts that Sandy could dump up to 50cm of rain across parts of Jamaica, Haiti, the Dominican Republic and eastern Cuba.