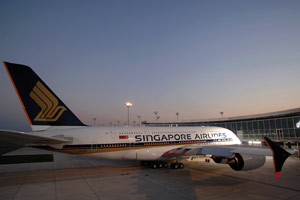 Singapore Airlines is strengthening its position in Australia by agreeing to acquire a 10% stake in Virgin Australia.

The A$105.3 million deal triggered a series of acquisitions by Virgin Australia as it seeks to heighten competition with Qantas. Abu Dhabi’s flag carrier, Etihad, already has a minority stake in Virgin Australia.

Virgin and Tiger will jointly spend another A$52.5 million to increase Tiger’s fleet, if regulators give their approval.

Virgin Australia also said it would take over Perth-based regional airline Skywest, which operates in Australia and South East Asia, for A$99 million.

Virgin Australia chief executive John Borghetti said the deals were designed to accelerate the airline’s growth and increase competition in the country, where the domestic market has long been dominated by Qantas.

The acquisitions of Tiger and Skywest would boost Virgin’s presence in the budget and regional markets, “enabling us to fast-track our expansion in these areas and become a stronger competitor”.

“These transactions will bring important benefits to Australia, driving growth in jobs, tourism and competition,” said Borghetti, adding that he planned to make the carrier Australia’s “airline of choice in all markets”.

SIA chief executive Goh Choon Phong said: “This major development demonstrates the importance and strength of the partnership between our two airlines, and our shared commitment to an alliance that provides a wide range of consumer benefits.

“Singapore Airlines fully supports the ongoing transformation at Virgin Australia, which has already resulted in a more competitive aviation market in Australia.

“With this investment, there is no doubt that Singapore Airlines and Virgin Australia intend to remain alliance partners for the long haul.”

Borghetti added: “Singapore Airlines is an important alliance partner of Virgin Australia and we are very pleased to have their support as an investor. This investment leaves Virgin Australia with a strong and flexible balance sheet to fund growth.”

Singapore Airlines and Virgin Australia entered into a long-term partnership last year. Expanded codeshare ties are under discussion and details will be announced in due course.