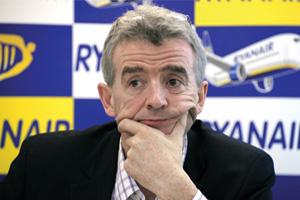 And he described the idea of a hub airport in the Thames Estuary – put forward by London mayor Boris Johnson – as “insane”, “stupid” and “hair-brained”.

He cast doubt on the time it would take to build any new airport on a greenfield site and the lack of infrastructure in place.

O’Leary said excess capacity for London would a good thing because it would see airports have to compete for airline business and that London was lucky to already be served by five airports.

He told the committee competition had worked in the northwest where Liverpool John Lennon Airport had started to give Manchester a run for its money.

“Trying to come up with a new greenfield runway, regardless of where you’re going to develop it, which has no infrastructure, no motorway or rail infrastructure would probably take the whole of the rest of my lifetime before it sees the sight of day,” O’Leary said. “What you don’t want to do is have one more runway.”

The UK had a unique opportunity when Stansted is sold next year to have three competing airports, all of which will be campaigning for new runways, said the Ryanair boss.

“The government should support that and promote three additional runways,” he added.

That would put an end to what he described as another 20 years of  “nonsensical debate”.

He claimed that UK aviation had been constrained by airport operator BAA [now known as Heathrow] so it could keep “overcharging airlines and passengers”.

O’Leary claimed Ryanair would have grown by 20 million more passengers a year in the UK had it not been for the uncompetitive market conditions caused by APD and airport charges.

He said this business has gone elsewhere to countries like Spain which he described as “not exactly competitive” but better than the UK.