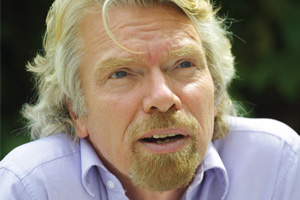 Sir Richard Branson has defended the Virgin Atlantic brand and indicated that he is not about to give up control of the airline.

He reacted to claims by Willie Walsh, chief executive of British Airways and Iberia parent IAG, that the Virgin Atlantic name would disappear as part of a suggested deal by Delta Air Lines to buy out Singapore Airlines’ 49% stake.

Sir Richard said:  “Rumours have been spread in the press that I am planning to give up control of Virgin Atlantic and, according to Willie Walsh, who runs BA, that our brand will soon disappear. This is wishful thinking and totally misguided.”

Urging his rival to “put his money where his mouth is,” Sir Richard added on his blog on the Virgin Group website: “We intend to carry on doing so for many years to come and, contrary to Mr Walsh’s hopes, we have no plans to disappear. But since they are so confident, will BA accept our challenge?”

In response, describing Sir Richard as a “billionaire banker” who has contributed little to aviation, Walsh said:

Walsh, speaking in the South Korean capital Seoul, where British Airways is launching a new route, said: “If he wants to say he will be owning it in five years’ time in its current form, then that would be an interesting bet to accept.

“I’m pretty sure I’ve said lots of things about Branson and he hasn’t sued me.”

Walsh went on to compare the Virgin boss unfavourably to Ryanair’s Michael O’Leary, the Guardian reported: “I don’t see that the guy has anything that stands out in terms of what he’s achieved in the industry, unlike others.

“O’Leary has been a true pioneer and changed the industry. He’s a very abrasive individual but he manages customer expectation like no one else in the world. Everyone has a clear idea before they book a Ryanair flight and I don’t think they disappoint.

“But on financial performance, he’s achieved things no one else has and he should be recognised for that. He’s demonstrated that you can be profitable in this industry even in a downturn and even in a recession.”

Reports suggest that a deal with Delta could be unveiled as soon as today, possibly involving a joint venture on transatlantic routes from Heathrow.

David Fintzen, analyst at Barclays, told the Financial Times that Virgin could provide Delta with increased access to capacity-constrained Heathrow

He estimated Virgin had 3.4% share of Heathrow’s take-off and landing slots, compared to Delta’s 1.3%.

Sir Richard’s Virgin Group owns 51% of Virgin Atlantic, and Delta is looking to acquire the remainder from SIA, which paid £600 million for its 49% stake in 1999.

Delta’s SkyTeam alliance partner Air France-KLM told the FT it was not part of the negotiations between Delta and SIA about Virgin Atlantic.