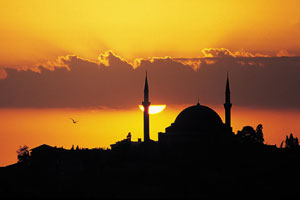 Turkey plans to build the world’s largest airport with six runways at a cost of $5.6 billion.

The new airport is to be developed on 77 million metres2 of land along the Black Sea coast of Istanbul and have a capacity of 150 million passengers a year.

The first phase of a four-stage project will have an annual capacity of 90 million and be operational by 2017, according to the country’s transportation minister Binali Yıldırım.

This is double the capability of Istanbul’s current Ataturk airport, while the city’s Sabiha airport handles 15 million passengers.

Yıldırım claimed the six-runway airport’s planned final capacity of 150 million passengers would make it the biggest in the world, surpassing Atlanta, which handles 90 million a year.

“It is obvious a new airport is needed,” he said, adding that it would help boost tourism as Turkey prepares its bid for the 2020 Olympics.

Yıldırım said: “There has been a great increase in the number of flights and passengers to Istanbul in the past 10 years. The number of travellers has surpassed Istanbul’s population by four times.

“The ability to improve and expand Ataturk airport is severely limited. Therefore, in order to realise Istanbul’s future air-traffic potential and to provide a solution, it is evident that a new airport is needed.”

The airport will have six runways and “at full capacity the new airport will be the largest in the world in terms of passengers”.