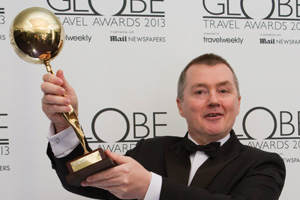 After picking up the Outstanding Achievement Awards at last week’s Travel Weekly Globe Awards, the BA boss spoke to Ian Taylor about the 787, Heathrow and consolidation in the aviation industry

Willie Walsh is not known for sitting back to await developments. After all, it was he who took to the air in 2010 to show aircraft could fly safely through a volcanic ash cloud.

So the former British Airways boss, now chief executive of BA parent International Airlines Group (IAG), was at Boeing’s plant in Seattle last week to see how things stand with the 787.

All 50 Dreamliners already in operation remained grounded this week following a spate of incidents culminating in an emergency landing in Japan due to a battery fire.

BA expects delivery of its first Dreamliner in May, 20 months after the aircraft entered service. But Boeing has halted all deliveries until investigators give the 787s’ lithium-ion batteries and electrical systems a clean bill of health.

Walsh insists: “I remain confident about the 787. It is not unusual for a new aircraft to suffer problems. We remain committed to the aircraft.”

He declines to speculate on the extent of the problem “in a situation where investigators in the US and Japan are looking into it”.

However, he says: “Boeing continues to produce the aircraft. It is not delivering any at the moment. That is a temporary situation. If it is extended, it could be that deliveries are affected.

“But you have to expect problems with new designs. We chose not to be an early customer but to wait 18 months for any teething problems to be ironed out.”

Walsh concedes: “The battery issue has come as a surprise. Nothing arose with the batteries during the testing programme.”

But he is not jumping to any conclusions. “We have to wait for the authorities to report,” he says. “I’ve not seen anything at this stage to suggest a major problem.”

Walsh is unwilling to base his judgment on media reports when it comes to Heathrow’s difficulty in dealing with snow last weekend.

“The media can be a bit hysterical about Heathrow and it is unfair,” he says. “You cannot expect an airport operating at almost 100% capacity to continue at that capacity when you get snow.

“People are deluded if they believe an airport like Heathrow can operate at full capacity when there is snow. Heathrow has done a good job in the circumstances.

“It doesn’t matter whether you have two or three runways. Look at Geneva. It has had severe disruption because of snow. You could say Switzerland should expect snow, but Geneva has one runway and it had to close.”

The IAG boss also takes what might be considered a contrary view on Ryanair’s takeover bid  for Aer Lingus.

The bid is subject to an EC competition review. It is opposed by the Irish government and by Aer Lingus, an airline Walsh once ran. Yet, according to Walsh: “Ryanair’s argument has merit.”

BA has agreed to buy Aer Lingus slots at Heathrow if Ryanair captures the carrier. Walsh says: “The idea you need competing airlines for a market the size of Ireland is nonsense. You don’t need two airlines to ensure the consumer benefits. The focus of the competition authorities should be on what is right in the global market.”

Walsh foresees more of the same, particularly in the US where BA partner American Airlines is in merger talks with US Airways.

IAG has previously indicated it could take a minority stake in American, an option Walsh now describes as “unlikely”.

Referring to US Airways and American, he says: “The pair signed a non-disclosure agreement, but what they have said publicly suggests American has warmed to a merger. Our assessment is it would be positive. Consolidation needs to happen.”

Despite long dealings with American, Walsh does not know former American executive Craig Kreeger who takes over at Virgin Atlantic in February. However, Walsh says he is sorry to see Virgin’s current chief executive, Steve Ridgway, depart.

“Steve did a good job,” says Walsh. “He represented Virgin Atlantic well and he was good from an industry point of view. There was a common understanding between us on regulatory and capacity issues. I’m sorry to see him go.”