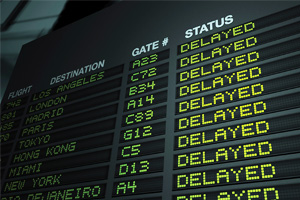 Operators face an onslaught of compensation claims from passengers suffering from flight delays in the wake of a landmark European legal ruling.

Thomas Cook was ordered to make a payout to a retired teacher after he and his wife waited 22 hours for a flight home.

Jeff Halsall became one of the first passengers in the UK to be awarded damages from a tour operator for a delay after he successfully sued the firm for the air fare of £680.

The court victory followed a European Court ruling last October and could now pave the way for thousands of holidaymakers to claim compensation if they face delays of more than three hours for their flights.

Halsall took Cook to court after waiting 22 hours for a return flight from Tenerife to East Midlands Airport in October 2009.

A judge initially rejected the legal claim after Cook said the delay was due to  “exceptional circumstance” beyond its control.

But Halsall appealed against the decision after learning of new European legislation which allows people to claim between £200 and £480 compensation for delays over three hours in EU countries.

He and his wife were awarded €800 (£640) at Stoke-on-Trent County Court on Monday after a judge heard their flight was postponed due to a mechanical fault.

Under the new rules, passengers can make a successful compensation claim if the delay is the fault of the airline.

Airlines will still be able to deny payouts where delays are outside their control, such as during bad weather or strikes.

But the ruling means that travellers are likely to be able to claim compensation for flight delays dating back to 2005. Claims can be made on all EU flights which departed since February 17, 2005.

The Civil Aviation Authority said the legal victory appears to be the first in the UK since the European ruling.

Raymond Veldkamp, who runs the Flight Delayed website which helps travellers fight for compensation, estimated that as many as two million suffer delays of more than three hours when using UK airports each year.

If half of these were the airline’s fault, one million might be eligible for compensation. Even if that figure was only one in five, 400,000 would still be eligible.

Veldkamp calculated that £73 million is owed to travellers across Europe for the past five years, according to a Daily Mail report.

Cook said it had offered Halsall more money than the figure eventually awarded by the court.

A spokesman told the newspaper: “We appreciate how frustrating flight delays can be and we’ve reiterated our apology to Mr Halsall for the lengthy wait he and his wife experienced.

“We always look at claims such as this fairly and make every effort to resolve complaints without the need for a court hearing.”

Halsall, from Stoke-on-Trent, encouraged other passengers who had suffered long delays to check whether they had a claim for compensation.

“Our claim has been going on for years and we are just glad it is finally sorted,” he said. “There were hundreds of passengers on our flight and most of those people won’t know that they have the right to make this claim.”