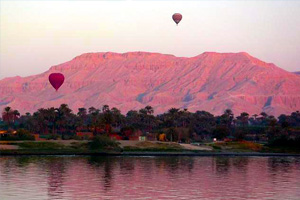 British nationals are reported to be among the 18 foreign tourists killed in a hot air balloon crash in Egypt this morning.

Egyptian police said the victims include nine from Hong Kong, four from Japan, two from the United Kingdom, two from France and two from Egypt, according to the BBC.

A total of 21 tourists and a pilot were onboard the hot air balloon during a sunrise flight when it caught fire and exploded, plunging into fields west of the ancient Egyptian city of Luxor today, state-run Nile TV reported.

At least two people, including the balloon’s pilot, reportedly survived, apparently by jumping out of the balloon before it crashed, after it caught fire when it was at 1,000 ft (300m).

Sky News reported that two Britons onboard have been taken to hospital in a critical condition.

Dr Hany Sabry, from Luxor International Hospital, told Sky News that one of the injured passengers suffered multiple fractures and internal bleeding, while the second injured passenger remains under observation in the intensive care unit.

An employee at the company operating the balloon, Sky Cruise, said two people in the balloon survived by jumping from the basket before it hit the ground. The balloon’s pilot is also believed to have survived the crash.

Luxor is one of the most popular destinations for travellers to Egypt and a starting point for many Nile cruises.

Ahmed Aboud, a spokesman for companies that operate balloon flights in the area, told Reuters that one tourist and the balloon pilot had survived the accident, which happened after a gas explosion at 1,000 feet.

“There were 20 passengers aboard,” said Aboud. “An explosion happened and 19 passengers died. One tourist and the pilot survived.”

Aboud is the representative of eight companies that operate balloons in Luxor.

The Foreign and Commonwealth Office said: “We are aware of reports of a balloon crash in Luxor and are making urgent enquiries.”

DoSomethingDifferent.com confirmed it had taken Luxor balloon flights off-sale and was refunding all customers with future bookings. The tickets specialist said it did not believe any of its customers were involved in the accident.