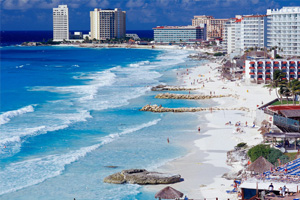 Six people were killed and five wounded as two men attacked a bar with guns on the outskirts of the Mexican resort of Cancun yesterday.

The office of the Mexican state’s attorney general confirmed the shooting carried out by two men armed with a machine gun and a handgun, Reuters reported.

No further details of the incident were available.

Cancun has largely escaped the drug-related violence that has racked the Pacific coast resort of Acapulco.

Six Spanish women were raped by hooded gunmen who forced their way into the Acapulco beach house the women had rented last month.

Mexican President Enrique Pena Nieto has vowed to reduce the violence that soared after his predecessor, Felipe Calderon, launched an assault on drug cartels.

More than 70,000 people have been killed in drug-related violence in Mexico since 2007, according to Reuters.