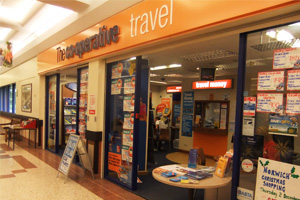 Writing for this morning’s Travel Weekly Business:am email briefing, Greenacre, architect of the joint venture with Thomas Cook, asks Cook to consider whether the plan “will deliver”.

He also queries the future for The Co‑operative Travel name, arguing: “There appears little attempt to continue differentiation between brands.”

Greenacre ran The Co-operative Travel for three decades, retiring at the end of 2011 after completing the joint venture.

He says the deal to combine the retail businesses “aimed to ensure The Co-operative Travel would continue to flourish while as many jobs as possible were protected”.

Greenacre argues the company was “still profitable” at the time, although its profitability was declining. “We knew not all jobs would be protected [and] unprofitable shops and businesses would close”, he says. But he said only about 15 shops “were losing significant money”.

Thomas Cook this month announced the closure of 195 shops – 103 of them Co-operative Travel branches – and is in consultation over the loss of 2,500 jobs.

Greenacre acknowledges the seriousness of Cook’s financial situation, but pleads: “Make certain the branches on the closure list really have no future.”

He says in his experience “less business transfers [to other branches] when a shop closes than you think”.

He also advises Cook to rethink the policy on cluster managers, saying: “This has been tried many times and never delivered.” Cook plans for assistant managers to run shops day to day, with ‘cluster managers’ having overall responsibility for two to five shops.

Greenacre’s biggest concern is the future of The Co-operative Travel brand.

“There has been little commentary about the part The Co-operative Travel will play in the long term,” he says.

A Thomas Cook spokesman said:  “We are absolutely committed to The Co-operative Travel.”