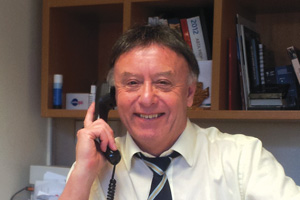 Boss lives the Cheam after support from Advantage

Dave Smith knows what it’s like to be a struggling high street agent in difficult economic times. His agency has failed twice, which included having to close briefly once, but has always managed to get back on its feet.

It is now trading as a successful retailer and Dave’s relief is almost palpable.

Since the end of January, Village Travel in Cheam has been running as an Advantage managed service agency after four staff, including Dave, bought into the business.

But the situation did not look so rosy on January 16 this year for the agency, then an Ambassador Travel branch.

“I received a call out of the blue at 9am from the owners to say we were ceasing trading,” Dave recalls. “I was told to put a sign on the door and tell the girls they were being made redundant. I was stunned.”

Such was the determination of Dave and his team to keep the branch – profitable in its own right despite the failure of the Ambassador Travel chain – afloat and keep their jobs, they immediately brainstormed a ‘plan B’.

“The girls asked if we could take it on. It seemed crazy to shut down an office making a profit. Advantage said it was possible, and we were able to carry on trading,” says Dave.

There was no doubt a sense of déjà vu for Dave. The near-closure of the agency this year brought back memories of 2010 when one of its best business clients went into liquidation, leaving a debt of £45,000 owed to the company.

“It hit us badly. We lost our Iata licence and tried to sell the business for a couple of years,” says Dave, who was forced to liquidate the business just before its takeover by Ambassador Travel.

“I had a lot of stress at that time and kept putting money in to keep us afloat,” adds Dave, who started Cheam Village’s only travel agency as Travel World in 1981 with a silent business partner and took it over in a management buyout in the early 1990s.

Now, with the business being run as a managed service agency, Dave says the daily pressure on staff has been reduced.

“Advantage is providing the bonding and the back-office systems and payments, which has taken away the financial pressure,” says Dave.

“And as we are all owners we are more enthusiastic than we were and very positive about the future.”