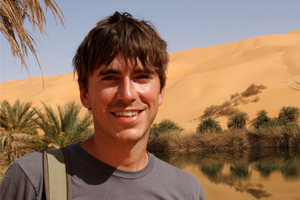 The Advantage conference in Malaga at the weekend had its share of high points.

One was Joanna Lumley, who held the conference spellbound with a delivery punctuated by Patsy-isms.

At one point Lumley declared: “Let’s make travel a bit more frightening.” She suggested agents and tour operators expand their portfolios and ask clients: “Do you want a dangerous holiday?”

BBC TV documentary maker and author Simon Reeve (pictured) provided another highlight, not least because he was refreshingly un-full of himself – declining to be called “an adventurer” in favour of “just a TV ponce”.

A third headline speaker, Daniel Moylan, was as sparky as the man he advises on aviation – London Mayor Boris Johnson.

Moylan had to contend with making the case for closing Heathrow in favour of new hub airport east of London on the day the Commons Transport Select Committee came out in favour of expanding Heathrow.

He was pretty unapologetic about it, describing Heathrow as “noise polluting” and “a moral scandal”. The airport would be better turned into housing, he said. It could be redeveloped as “a whole new London borough”.

Likewise, the case for developing Gatwick was “a load of nonsense”.

Moylan was even prepared to disagree with his master. “Boris would be perfectly happy with a four runway Stansted,” he said. “I favour an estuary airport.”

He poured scorn on the suggestion that a shipload of unexploded Second World War ordinance aboard a shipwreck in the Thames might compromise the safety of an estuary airport.

“If the ship goes up it will take Sheerness with it,” Moylan said. “Don’t you think if it’s liable to explode someone should do something about it regardless of whether there is an airport?”

He has a point. The SS Richard Montgomery, which sank in 1944 off Sheerness, contains 1,400 tonnes of high explosive and a study in 2004 concluded it remains deadly.

However, neither the Montgomery nor Moylan provided the real fireworks at the conference.

The conference organisers could be forgiven for thinking the absence of former chief executive John McEwan might cause a spark of concern among members. McEwan stepped down suddenly at the end of April.

But there was little overt controversy about McEwan’s departure – just appreciation of his contribution. The fireworks went off elsewhere.

The whizz-bang came in, of all things, a corporate travel session when Iata representatives attempted to explain the airline association’s New Distribution Capability (NDC) programme.

In essence, a group of major airlines propose, through Iata, to establish an industry standard (NDC) for an online distribution platform that would allow them to bypass the GDSs for the purposes of third-party distribution.

Iata head of business development Yanik Hoyles insisted: “We are not building a system … we’re trying to modernise something 40-odd years old.

“NDC will provide a standard … consistent with online shopping.”

He conceded: “It is potentially a massive change. An industry standard would mean [GDSs] opening up to competition … There could be new entrants.”

The close of Hoyles initial presentation triggered shouting from the floor and accusations from one major retailer, to applause, that the session had not been balanced.

GDS representatives at the conference were also having none of it. One after another they rose to denounce Iata’s depiction of NDC as a long-overdue and benign development.

Amadeus UK managing director Diane Bouzebiba was likewise applauded when she ticked off British Airways channel strategy manager Dilshard Caffoor for suggesting NDC was required to address the lack of a single standard for distribution platforms.

“There is a standard,” she said. “The problem is not every airline wants to go through it.”

Cross-questioned on the implications for ‘agents’ (travel management companies), Hoyles was (understandably) unable to answer.

“On cost, I don’t know,” he said. “On commission rates, we can’t answer. That is a one-on-one discussion.” When he sat down at the session’s close, he described the experience as “a lose-lose”.

Hoyles seems a decent guy. But it was marvellous entertainment and I recommend every industry conference organiser book an Iata speaker.

Of course, Iata will proceed with NDC. There are pilot projects in the offing and airlines and IT providers are keen to get on with it. At some point, Iata will reach an accommodation with all the leading GDSs because the airlines can’t fully proceed without them.

But in the meantime NDC provides spectator ‘sport’ akin to bear baiting. When else did anyone describe corporate travel as explosive?