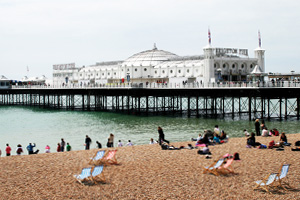 Two thirds of people (65%) plan to take their summer holiday in the UK this year – a higher proportion than the past two years, a poll for Travelodge shows.

The prediction from a poll of almost 3,000 people comes despite the dismal weather and tight household budgets.

The record number of projected ‘staycations’ represents a significant increase on the past two years, when 41% and 35% of Britons respectively took a domestic break, according to the research.

The summer holiday intentions study revealed that 42% of those planning a domestic break are taking a week’s holiday in the UK this summer, with 15% planning to be away for two weeks. A third (33%) are splitting their holidays over three short domestic breaks to visit a series of locations.

London has emerged as the top UK destination this year over Cornwall in 2012 as city breaks overtake traditional seaside holidays as the favourite domestic getaway.

The top five most popular types of UK breaks for Britons this year are:

Cornwall has lost its crown as the top domestic destination for the first time in five years, dropping to fourth position behind London, Edinburgh and the Lake District.

Travelodge chief executive Grant Hearn said: “The staycation trend, accelerating to record levels and boosting our economy by £12 billion this year, is a very welcome sign, and hopefully this is the start of our 2012 Olympics legacy gain.

“During 2012, our capital city was showcased in its true glory to all corners of the UK and the world, and it’s a great result that London has been crowned as the top staycation destination for 2013.”

He added: “However, we cannot rest on our laurels; as one of Britain’s biggest business sectors, the opportunity to grow is still great.

“We are not yet near to unlocking the true potential of our industry. British tourism needs to be treated like a serious business sector and the government needs to move our industry from the ineffective Department of Culture Media & Sports to the Department for Business, Innovation & Skills. Lack of immediate action is costing jobs, growth and investment.”