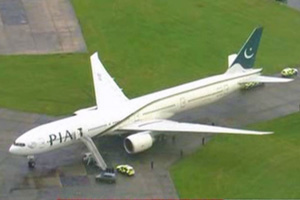 The PIA Boeing 777, carrying 308 passengers, was shadowed into Stansted by an RAF Typhoon fighter jet after the pilot reported threats being made and landed at the Essex airport.

Wajid Hasan, Pakistan’s high commissioner to the UK, told CNN that the two passengers “got into an altercation with air stewardesses and threatened to blow up the plane”.

The flight attendants contacted the pilot, who contacted UK air traffic control authorities, who then scrambled the fighter jet, he said.

The aircraft later continued on to Manchester from Stansted after all the passengers and cargo were screened, a process that took about four hours, according to the high commissioner’s office.

Tayyab Subhani, 30, and Mohammed Safdar, 41, were sent back to police custody after appearing at Chelmsford Magistrates Court yesterday. Their next court appearance is scheduled for August 5, according to Essex police.