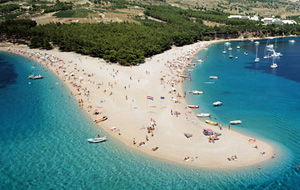 Croatia is being tipped as this summer’s hot spot following a spike in demand for local currency.

Demand for the Croatian kuna in 2013 between January and May rose by by 55% compared the same period in 2012, according to Post Office Travel Money.

The growth trend is accelerating with sales of the kuna up 61% year-on-year in May. Sales of the currency are running 22% ahead of the Bulgarian lev despite resort prices in Bulgaria being lower.

Although sterling is worth almost 5% less against the kuna than in June 2012, the latest Post Office Holiday Costs Barometer found that resort prices were cheaper in Croatia (Split) than in many other European destinations.

“Demand for Croatian currency has rocketed in recent times but we were hardly expecting to see further growth of 55% this year after the record sales surges of the past five years.

“Croatia has been growing steadily in popularity over the past five years but the latest surge suggests the country is about to become even more popular.

“Although Croatia has announced that it wants to join the Eurozone, it is unclear when this will happen so, for this year at least, holidaymakers should be aware that the kuna and not the euro remains the legal tender.”

This year’s Abta Travel Convention will be held in Dubrovnik, Croatia in October.