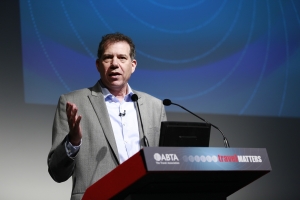 Successive UK governments “have taken aviation for granted” according to the new boss of Virgin Atlantic.

Craig Kreeger, Virgin Atlantic chief executive, told the Abta Travel Matters conference in London: “Air Passenger Duty and airport capacity [constraints] are having a chilling effect on travel to and from the UK.”

He said: “The UK has distinguished itself by lack of investment in infrastructure – you can’t expect Olympic-scale results from a school sports day budget.”

Kreeger added: “It’s unlikely I’ll see any increase in airport capacity in the southeast in my career. UK governments have taken the success of aviation and its role in economic recovery for granted.”

The Virgin Atlantic boss argued the failure to expand Heathrow or provide alternative capacity meant: “The UK hub for customers who live outside London is in the Netherlands [at Schiphol].”

Referring to the Davies Commission set up to make recommendations on airport capacity in the southeast, he said: “I expect the commission to consider all options. But misguided proposals to develop more than one airport are not a substitute for a mega-hub.”

Kreeger also hit out at APD, describing it as creating “gross distortions” in the UK market. He said: “The tax is much more heavily weighted on long haul than short haul. It’s unfair.”

Abta chief executive Mark Tanzer said the association would not give up on its campaign against APD.

Tanzer said: “APD costs the UK far more in long-term wealth than it benefits the Treasury in short-term income. We won’t give up. We are obviously engaged in a siege with the Treasury, but we believe there are people listening.”

He added: “If the effect of our campaigning is to limit the increase in APD, it is still worthwhile.”