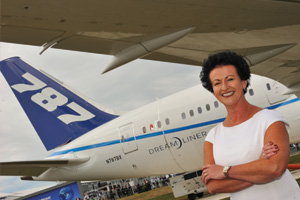 The boss of Thomson Airways, the first airline to order and fly the Boeing 787 Dreamliner, has described her relationship with the aircraft as “a bit like a marriage”.

“One day I love the Dreamliner to bits, the next I can’t see her far enough away,” she said.

Addressing the Association of Women Travel Executives at the annual Chair’s Awards, Browne, who flew on the Dreamliner’s first long-haul flight to Cancun last week, said: “It’s been very up and down on the way to this point.

“We’ve had the highs of being named best leisure airline at the Paris Air Show, me collecting my OBE from the Queen or having tears in my eyes when we landed in Mexico with all the customers cheering and saying it was the best flight they’d ever been on.

“But we also had the lows of the entire fleet being grounded after a four-year delay in January which gave everyone serious concerns, and then, after getting past that, just last week, not even 24 hours after the Cancun inaugural, one of our Dreamliners had to do a turn-back,” she said.

“Turn-backs are unusual, but not uncommon and it was purely precautionary. The bigger problem was that at the same time, a Dreamliner flying for Ethiopian Airways was on fire at Heathrow. I couldn’t believe it.”

Browne told AWTE members: “You have to learn to take the rough with the smooth. Trust in your systems and processes and in your people.

“Despite everything, I thoroughly believe the Dreamliner is a beauty and that she will be the only way to travel long-haul in the very near future.”

Check out photos from the awards