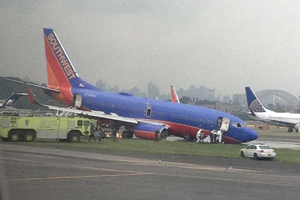 Ten people were hurt when a Southwest Airlines Boeing 737 skidded off the runway at New York’s LaGuardia airport.

Six of the casualties from the flight from Nashville were taken to hospital, according to reports.

There were 143 passengers and six crew on board the aircraft.

Bosco said the aircraft skidded on its nose before coming to rest in a grassy patch about half way down the runway. Emergency crews were seen spraying foam on the nose of the 737.

The US Federal Aviation Administration and the National Transportation Safety Board are investigating the incident.