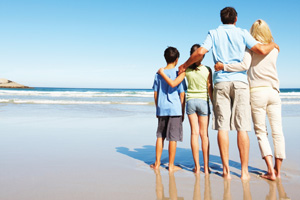 The benefits of families getting away from regular life for the annual holiday are many, but how we make sure it is affordable is a tricky problem to crack, says Lee Hayhurst

Anyone with school-age children will immediately identify with what Travelzoo’s Richard Singer has today labelled the ‘Parent Trap’.

In an age when parents increasingly share childcare responsibilities and family bread-winning the chance to jet off for two weeks together is more cherished than ever.

So it can seem that the world is against you when the schools, the government (through APD) and the industry itself though hiked costs appears to be conspiring to price you out of the market.

Yes, there is always the alternative of holidaying at home, but the cost of a domestic holiday can spiral – especially when the great British weather necessitates the odd trip to a nearby attraction.

The modern package holiday was pioneered here precisely because of the nature of the British climate and cost of living, but also a desire to escape and travel overseas.

A good many parents believe that two weeks with mum and dad experiencing a new culture, different food and a foreign language is much more educational than the equivalent time in school.

They may be kidding themselves, but this attitude points to the nature of the relationship that parents have with the education system in this country.

While many parents are willing to do what they can to help their children’s school improve, they sometimes feel their situation is ignored when it suits the school.

Remember the mass closures due to snow which were more to do with absenteeism records and the impact on league tables than health and safety?

From the start of the next school year amendment to the law on governing allowance for term-time holidays is only likely to exacerbate that.

That will see a no-tolerance rule applied to absence during term times for holidays except in exceptional circumstances like a religious holiday or a family bereavement.

In fact, the change is a hardening up of an old rule which did allow for 10 days per school year in special circumstances and only if approved by the school.

This has now gone, the government saying correctly it had become seen as an entitlement by parents rather than a rare concession.

Next year, anyone taking their children out of school without authority will be given a £60 fine per child per week.

Thousands of parents up and down the land are already ‘doing the math’ to work out whether this additional cost is worth accepting as opposed to the hiked school holiday prices.

So back to Singer’s ‘crusade’, and how he hopes this problem can be addressed.

Taken in isolation, the three areas he has identified on which to push the government and the trade look challenging in terms of getting a positive outcome.

A government e-petition with 41,000 signatories relating to the aforementioned law on absence prompted a pretty unequivocal response from the government.

And only last week the Transport Select Committee received a pretty comprehensive rebuttal of its calls for an overall review of APD, as Travel Weekly reported.

As for the trade working together to stamp down on profiteering during the school holidays, well parts of the industry are already doing that.

But for a sector that makes the majority of its profits during a six-week period, what is seen as profiteering in some quarters is simple business sense in others.

The national media likes to portray summer holidays as expensive, but another way of viewing that is that they subsidise what are unprofitably cheap holidays outside of peak demand.

It might be concluded that what does most to skew the market is the school year itself, with its long summer break and a lack of flexibility where every school’s terms times pretty much coincide.

However, just because the three areas identified by Singer look devilishly tricky to address, that does not mean he hasn’t identified a serious issue.

As he says, there must be some more ‘creative ways’ to alleviate the impact of the ‘Parent Trap’.

Industry charity the Family Holiday Association has done a great job in recent years lobbying on the importance of holidays for less well-off families.

Its work on social tourism highlights the many ways that an annual holiday can improve family life and also the behaviour and performance of children and parents when dealing with school.

The FHA is focused on those families who would always struggle to afford a holiday – overseas or domestic – but the benefits it has found of taking a break apply to all, rich or poor.

Indeed, the very fact that there is a charity called the Family Holiday Association indicates that there is a general acceptance of how valuable this aspect of family life is.

Holidays, particularly those involving an international flight, are a trapping of a modern, affluent consumer economy. But maybe we underestimate just how important they have become.