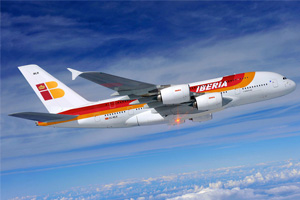 IAG reported a reduced operating loss of €33 million for the half year to June 30 against a loss of  €253 million in the same period a year earlier before exceptional items.

The group swung back into the black with a second quarter operating profit of €245 million compared to a loss of €4 million.

A reduction in fuel costs and improved passenger revenues – with total revenue up 2.1% in the six months to €8.7 billion – helped boost the results.

“Firstly, the benefits of Iberia’s restructuring are beginning to show. Having reduced capacity at Iberia in the first quarter, costs began to be taken out in the second quarter following the implementation of the mediator’s proposal.

“Nearly 1,700 employees have left the airline so far with remaining staff taking salary reductions of 18% for flight and cabin crew and 11% for all other employees.

“This is the first step in the restructuring but it is already bearing fruit with Iberia’s losses down from €93 million last year to €35 million, reversing the negative trend of the last 11 quarters.”

He added: “British Airways’ performance has improved with operating profit up from €94 million in 2012 to €247 million. The London market and transatlantic traffic remains strong, legacy costs from the BMI integration have ended and the airline remains focused on cost control.

“Vueling joined IAG on April 26, 2013 and in the rest of the quarter achieved an operating profit of €27 million. The airline has continued to manage its capacity growth effectively by expanding its business while increasing profits. It’s also benefitted from its Barcelona base where it has developed a strong competitive position.”

IAG described current trading as being in line with recent trends.

Group capacity is expected to increase by 5.2% this year including Vueling with a cut in non-fuel unit costs.