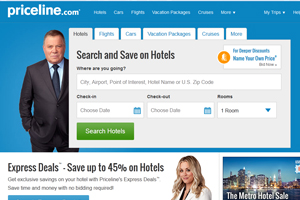 US analysts are salivating over the continuing rise on the fortunes of the world’s most valuable travel firm as its share price is forecast to hit $1,000 this year.

And the growth of Priceline, the parent of booking.com and Kayak, is being watched in awe in the UK where the giant is expected to continue to take market share.

Commenting on the share price on Twitter yesterday Chris Roche, chief commercial officer at Travel Republic, the UK’s biggest independent online travel agent, said:  “I can’t get over the continual growth of Priceline, arguably the largest threat to any OTA in the UK and overseas.”

It is predicted to become the first firm on the Standard and Poor’s 500, a stock market index based on the market capitalisations of 500 leading companies publicly traded in the US, to hit $1,000 share price.

Last week Priceline announced a 38% increase in bookings allied to a 24% increase in net revenue for the second quarter.

NBC said Priceline’s international brands, including leading hotel website booking.com, will be the driver of future growth as customers shift from offline to online.

Enis Taner, global macro editor for RiskReversal.com, was quoted as saying: “Priceline is one of the few stocks on a monster run in 2013 where the company has grown earnings just as quickly as the stock has appreciated.

“In the past three years earnings have tripled and the stock has tripled. The stock is no bubble.”

One potential downside for Priceline is its legendarily high marketing costs, namely the $1 billion plus it is said to spend on Google every year.

But the analysts said if it can keep this under control and maintain margins the $1,000 share price should be achieved this year.