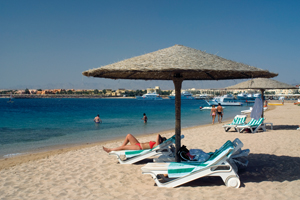 Holidaymakers due to travel to Egypt’s Red Sea resorts in the coming weeks expressed their anger as they were told they would not receive a refund.

The Foreign Office continues to advise against all but essential travel to most of the country, with the exception of the Red Sea resorts.

Tui Travel and Thomas Cook said on Friday they were monitoring the situation but Red Sea holidays were going ahead and normal booking conditions apply.

Germany, Switzerland and France have advised their citizens not to travel to the Red Sea resorts. Thomas Cook Germany, Tui Germany, DER Touristik and FTI said customers would get the chance to rebook to other destinations free of charge.

Pam Clarke, from Tamworth, Staffordshire, told the Daily Telegraph: “I am angry with Thomas Cook as my son Liam and his fiancee Kayleigh are due to fly to Hurghada on September 10 and for the last three weeks have been trying to change destination due to the unrest in Egypt.

“They have been fobbed off by Thomas Cook continually, they have tried to change to another destination and even offered to pay more money than the almost £2,000 they have paid for their holiday but Thomas Cook say ‘Don’t panic we are monitoring the situation’.”

One holidaymaker wrote on travelweekly.co.uk: “I am due to go to Sharm el Sheikh next week with my family. I am on the brink of cancellation. Our tour operator seems indifferent now we have paid our money.

“The British government should act now in the same way as other countries have.”

Meanwhile, the Navy is on standby to evacuate British tourists from Cairo, the Sunday Express reported.

HMS Illustrious, the assault ship Bulwark and a fleet of frigates and support ships on their way to Gibraltar will participate in a four-month long series of war games that will see them sail through the Red Sea.

A naval source told the newspaper: “The planning team will be looking at all options and making sure we are ready to evacuate British nationals if it comes to that, or in a worst-case scenario intervene to rescue UK citizens taken hostage.”

The Egyptian interim government was meeting yesterday to discuss the crisis in the country, following protests and hundreds of deaths in clashes over the past week.