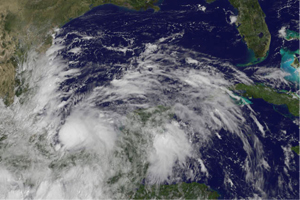 At least 40 people have been killed and tourists stranded in Mexico as two powerful storms struck the country simultaneously.

The Foreign & Commonwealth Office upgraded its travel advisory to the country yesterday and warned: “Severe weather and sea conditions associated with Tropical Storms Ingrid and Manuel are currently affecting most parts of the country.

“The airport in Acapulco is still closed until further notice as well as the motorway from Mexico City to Acapulco.”

British travellers were urged to monitor local media and follow the advice of the local authorities.

Hurricane Ingrid sent thousands to shelters on Mexico’s Gulf Coast before it was downgraded to a tropical storm just before making landfall.

The resort city of Acapulco was among those worst hit with 11 people confirmed dead, six of them members of the same family whose house collapsed in a landslide.