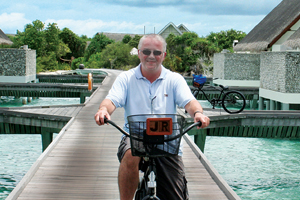 Joseph Rajkovic likes to think he knows the Caribbean fairly well, but to pick up a personal award recognising his sales to the region still came as a surprise.

Two weeks ago he received Caribtours’ individual award for excellence for selling the operator and supporting the brand through social media.

“It was a bit of a shock,” admits Joseph. “I didn’t expect it, but it was perfect to win.”

He’s already decided where the award will sit in the office – in pride of place above the fireplace – despite the fact it’s not yet left his kitchen table. “I keep forgetting to bring it in!” he confesses.

“I would never profess to be a brainbox on the Caribbean but I am confident selling it,” adds Joseph, who has so far visited half a dozen Caribbean islands.

“It’s important to be honest with customers about the product. We have an upmarket clientele and you can’t pull the wool over their eyes. Sometimes you have to take hotel star ratings with a pinch of salt.”

The award comes at a good time for the agency, which recently moved from an upstairs office in the Somerset village of Wedmore, where it had been based since it started 11 years ago, to a high street shop location across the road.

“It’s made a difference being in a shop, without a doubt,” says Joseph, who set up the agency with business partner John Wilson.

“We were a bit worried about time-wasters, but business has got better. We have been busier than we were in the office where sometimes we would go two to three days without anyone coming in.”

Although the agency specialises in long-haul, tailor-made luxury, having a high street shop has allowed Joseph to market the fact they can sell all kinds of products.

The move proved the right thing to do financially too, says Joseph, with the rent less than in the previous offices.

“It is slightly smaller but we are paying £200 less a month and have rented from someone who is a good customer of ours,” he explains.