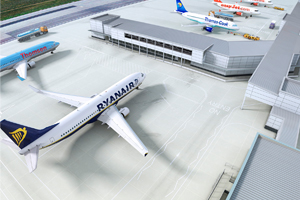 Work has started on a £6.5 million project at Bristol airport aimed at easing departure lounge congestion during peak travel times.

A 3,880 square metre central walkway will connect to the departure lounge, served by an escalator, six lifts, food and drink vending, and toilets.

The new structure, due to be completed by next summer, will include four new pre-boarding zones serving up to six departure gates.

All gates will be within 105 metres or less of the main terminal and the walkway will provide access to the existing forward coaching lounge currently used by passengers boarding BMI Regional flights.

The design of the new facility takes into account the latest generation of twin-engine, wide-body aircraft, such as the Boeing 787 and Airbus A350, with provision made for the addition of an airbridge for passengers boarding potential long-haul flights in future.

Overall planning approval is in place for facilities at Bristol to handle 10 million passengers a year against 5.9 million in 2012. This consists of 30 separate components which will be developed over time in line with passenger demand, including extensions to the terminal, a public transport interchange, multi-storey car park and an on-site hotel.

Chief executive Robert Sinclair said: “The construction of the central walkway is a demonstration of our ambition to be the airport of choice across the southwest and south Wales. It will significantly enhance the airport experience for our passengers and sets the bar high for future development of the terminal.

“Following a record-breaking summer we felt the time was right to make further investment in our passenger facilities.

“Not only will this new development deliver an improved airport experience for passengers and relieve congestion at peak times, it also demonstrates that Bristol airport is committed to providing the best possible facilities for our airline partners.”