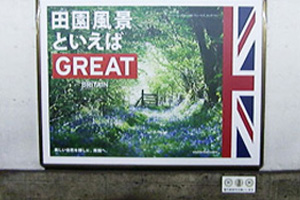 Record visitor spending of £11.2 billion in first seven months of 2013 has been recorded by VisitBritain a year on from the London 2012 Olympic and Paralympic Games.

The spending figure is 13% up on the same period last year.

More than 31 million travellers came to the UK in 2012, contributing more than £18.6 billion to the economy.

The GREAT Britain marketing campaign, which VisitBritain operates jointly across government, has contributed at least £960 million to the economy over the past two years.

For every £1 spent by VisitBritain overseas, £19 is spent by overseas visitors in Britain, according to the tourism agency as it outlined inbound visitor performance in its annual review.

Travel trade, image, product and access are the four areas VisitBritain will concentrate on over the next year.

Events in 2014 include the Commonwealth Games in Scotland and the centenary of the birth of Welsh writer Dylan Thomas.

VisitBritain aims to attract 40 million overseas visitors by 2020 and create a further 200,000 jobs.

The tourism body claims to be well on track to hit a target of £50 million of private sector match funding by the end of the 2014/15 financial year.

VisitBritain has worked with partners such as British Airways, easyJet, Expedia and STA Travel in the past 12 months.

Chairman Christopher Rodrigues said: “Our challenge was to turn aspiration into action; to convert the enthusiasm of London 2012 into sustained increases in awareness and intention to visit.

“I am delighted to report that over the last 12 months VisitBritain has capitalised on this golden opportunity for tourism.

“Our overall strategic aim for 2014 is to build on our international image, engage further with the travel trade, broaden the product range on offer for tourists and make it easier to get to Britain.

“Through a strong partnership – government, tourist board and industry – I am confident we will achieve the goals we have set ourselves.”

New tourism minister Helen Grant said: “I want to do all I can to help deliver further growth for the tourism sector, building on the great success of 2012 when we showcased the best of Britain to the world.

“I look forward to working closely with VisitBritain and the wider tourism industry to encourage more people to come to Britain and enjoy the great culture and heritage we have to offer.”