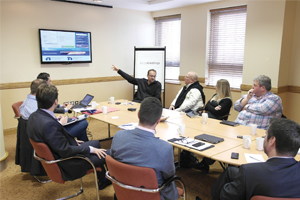 Agents are battling a lack of aggregation in the cruise sector as operators entice them to use their own in-house booking systems.

Amadeus Cruise Shop features most of the main cruise lines in the UK with the notable exception of Carnival UK’s brands: P&O Cruises, Cunard and Princess Cruises.Carnival UK trade arm Complete Cruise Solution pulled out of the Amadeus system in 2011 to save on distribution costs.

Amadeus hopes to entice lines back with a new trade platform developed with CWT Digital to give agents a one-stop shop to search for and compare product easily and quickly.

However, many lines are incentivising agents to use their own technology – resulting in agents switching between multiple systems to earn more commission.

This is slowing agents down, hampering their ability to compare deals and sell cruise and even putting some off selling cruise entirely, the round-table heard.

Paul Frost (pictured right), marketing director at Jetline Cruise, said: “Lines have pushed everyone away from Amadeus because they want to entice you to sell their product.

“This is no bad thing, but to ask an agent, who has a customer who does not know what they want, to log in to Norwegian Cruise Line, to Cruising Power for Royal Caribbean and Celebrity, to Complete Cruise Solution, to Polar for Carnival, well, no agent’s going to do that.

“To run an effective business you can’t have an agent spending three or four hours on one customer trying to find something when they don’t even know what they are trying to find. Agents are fighting against what should be a really simple process.”

Andy Stark, managing director of Global Travel Group, said: “There is aggregation for every other type of product but it seems to me there’s no aggregator for cruise.”

Frost said: “There used to be Amadeus, but cruise lines decided to invest money to keep the agents within their own framework.”

Cruise Shop has solved a key failing of existing systems, according to Frost.

Frost said one of the major failures of cruise booking systems is they do not enable agents to search for a selection of ports with the required dates.

“It will be interesting to see if Amadeus has solved this as this has been one of the biggest problems for agents,” he said.

“You can never ask an agent to make such a search. I would not want my agents to do that sort of enquiry because it would take them three or four hours and they would end up with nothing.”

Having been shown how the new Amadeus system enables a search by multiple destinations, Frost said: “You have just solved a huge issue the industry has.”

Quality of cruise content is key issue in battle for sales

Cruise operators could generate more sales through agents if they ensured the content they have on their own sites was available to the trade.

Leading agency consortium Advantage Travel Centres represents a wide range of cruise sellers, from Cruise.co.uk at one end of the market to single-brand high street stores at the other.

To help its members it has developed its own Gateway booking platform with Multicom.

“All our agents are looking for some technology that would allow them to quote a cruise in a quicker way.

“We have built our own gateway and tried to put cruise lines on that. The issue is the content that you pull via XML has not got as much information as on their own sites.”

Dan Caplin, managing director of CWT Digital, said there was a wider issue with online content, with neither agents nor operators answering the questions people have.

“It’s the responsibility of cruise lines to get over what makes their product different. And agents need to get content online to change people’s perceptions.”

Jetline’s Frost said many deals loaded on to systems were overly complex, as cruise operators constantly tweaked offers and incentives to drive sales.

“At times there are five different options to book exactly the same cruise,” he said. “People just want simplicity.

“We are a reasonably-sized agent but we have to put huge resources in just to update our website because none of this comes through any technology feed.”

Cruise operators ‘fail customers by focusing on price over suitability’

Aggressive pricing in the cruise sector is undermining attempts by the industry to match the right customer with the right cruise, the round-table debate was told.

Paul Frost, of Jetline Cruise, said although it was vital that customers were sold the right product, too often the price dictated what was bought.

“Probably the biggest problem in the cruise industry is matching people to the brands,” he said.

“No matter how much training you do [for agents], people are being put on the brands because of the price, not because it matches their needs.”

Raphael Giacardi, a producer at deals site Travelzoo, who specialises in cruise, blamed cruise operators’ newspaper advertising, much of which tended to focus on price and the ships. This, he said, was particularly unhelpful for attracting non-cruisers into the sector.

“That’s what the whole industry needs to work on: selling cruise as an experience, not just being on a ship,” said Giacardi.

Rob Sinclair-Barnes (pictured), marketing director at Amadeus, said: “The role of the agent is to assist travellers and provide them with a holiday that works for them. We need to recognise that the majority of agents are not as well-travelled [as we might like], but you don’t have to go somewhere to experience it.

“What you want is the tools to give you the information at the right point in time.

“You have to make sure agents have the ability to quickly answer questions and to use the technology to educate themselves when the phones are a little bit silent.”