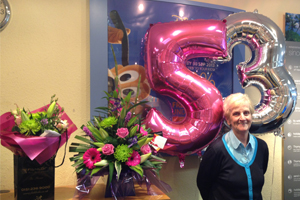 On Marion Goulding’s last day at work, there were the usual bouquets of flowers, farewell drinks and tearful goodbyes.

But the 74-year-old grandmother, who put in 53 years’ service, mostly as a foreign exchange cashier, at Thomas Cook’s oldest surviving shop, in Church Street, Liverpool, did not expect a personal phone call from chief executive Harriet Green.

“She phoned me unexpectedly from New York to congratulate me on my years of service and sent me flowers,” says Marion, who retired last week. “She was really nice.”

For years Marion had put off retiring, but when she found out a second grandchild was on the way she knew it was time to stop counting out the currency.

“When my daughter Jenny said she was expecting another baby I knew it was time for me to go. The baby decided it,” said Marion, who will look after nine-month-old Eva two days a week and take four-year-old Isabelle to school with husband Norman.

Marion started at Thomas Cook in 1960 as a telephonist.

“The youngsters these days would struggle to cope with what we used to do,” she says. “You had to do everything by hand, so it took a long time to serve every customer, that’s why we had such long queues. Even balancing the tills took 45 minutes.

“It was nothing to be at work until 7.30pm to get paperwork finished. These days with the internet everything takes seconds.”

After six years at the company, Marion became a fully-fledged foreign exchange cashier. She worked at several branches but returned to end her career at Church Street.

The introduction of the euro in 1999 marked a big change. “Before that, you had every currency under the sun – every country had their own,” says Marion, recalling the days of the Italian lira, Spanish pesetas, French francs and Greek drachmas.

And demand changed too as customers travelled farther afield. “Currencies for countries like India and Thailand were just not asked for in the early days,” she added.

As well as caring for her grandchildren, Marion is planning some well-earned time off, including a holiday in Lanzarote.

“I will keep popping into the shop; they were a lovely crowd to work with and it was emotional to go,” she says. Then she jokes: “But I’ve given them 14 extra years – I think they’ve had their pound of flesh!”