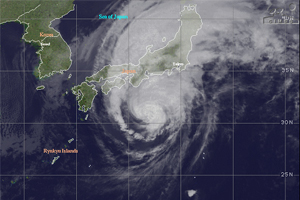 A powerful typhoon has claimed the lives of at least 13 people as it passed close to Tokyo.

Nearly 20,000 people were ordered to evacuate and thousands of schools shut as a result of the typhoon, Reuters news agency reported.

Typhoon Wipha was expected to move northeast and weaken over the course of the day.

It caused landslides and flooding on Izu Oshima, a volcanic island popular with tourists south of Tokyo, with several houses destroyed.

Many people died when their homes collapsed or were buried in mudslides on the island, according to local reports.

The storm brought strong winds and record rainfall of 4.8 inches in one hour this morning local time to Izu Oshima, which lies some 75 miles south of the Japanese capital, the BBC reported.

“It is the strongest typhoon in 10 years to pass the Kanto [Tokyo area] region,” Hiroyuki Uchida, the Japan Meteorological Agency’s chief forecaster, was reported as saying.