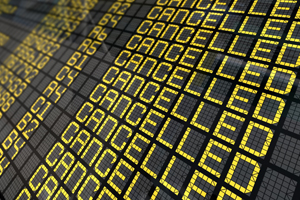 Travellers have been warned of flight cancellations and delays as a severe storm continues to batter parts of England and Wales.

Heathrow has cancelled 130 flights and warned passengers to check with their airline before travelling to the airport.

Gatwick has reported seven cancellations and advised customers to leave extra time as train services to the airport are running a limited service.

British Airways has reduced its schedule from Heathrow, but plans to operate all flights from Gatwick and London City airports as normal. All cancellations at Heathrow are for European and domestic flights, with long-haul expected to operate as planned.

Some train operators are now running a limited service, but most are still suspended. Eurostar is running but with warnings of delays.

Network Rail said the damage has been worse than expected. More than 100 fallen trees have been found on lines, and several hundred staff have been working to monitor conditions and react to any damage.

Dover Port has reopened and ferry services are continuing as normal.

A Guild of Travel Management Companies (GTMC) conference due in London today was cancelled because of the disruption caused by the weather. A GTMC spokeswoman said TMC members due to attend needed to support teams working on disruption to clients.

BBC forecasters say the storm has now ended in the UK – leaving a “broadly windy day”. However, the Environment Agency has issued 12 flood warnings – in south-west England, East Anglia and the Midlands, there are also 132 flood alerts across England and Wales.