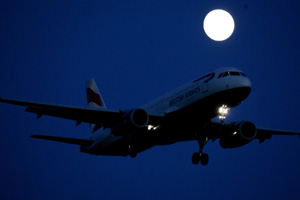 Night flights are set to continue at Heathrow, Gatwick and Stansted for at least another four years.

Aviation minister Robert Goodwill said it would “not be sensible” to change flights until a decision is reached on new runway capacity in the London area.

The current night flights regime is now set to continue until October 2017.

The government’s proposals are open for consultation and a final decision will be made next spring.

Under the current regime at Heathrow, there are no scheduled take-offs or landings between 11.30pm and 4.30am.

Night flying is classified as taking place between 11.30pm and 6am at both Gatwick and Stansted.

The current night flight regime at Heathrow, Stansted and Gatwick ends in October 2014.

But following the publication of its report, Night Flying Restrictions at Heathrow, Gatwick and Stansted Stage 2 Consultation, the government has proposed to effectively roll-over the existing regime until 2017.

There will also be no change to the noise quotas set for each of the three airports, the government proposed.

But ministers agreed to extend the ban on the noisiest types of aircraft.

Flights by such aircraft at Heathrow will now be banned between 11pm and 7am, extended from the current banned period of 11.30pm until 7am.

The Department for Transport said that “most responses from the public argued for a ban on night flights”, but added that at Heathrow between now and 2017 “we fully expect the trend in quieter aircraft to continue”.

John Stewart, chairman of campaign group Heathrow Association for the Control of Aircraft Noise told the BBC: “There will be huge disappointment that their sleep will continue to disturbed.