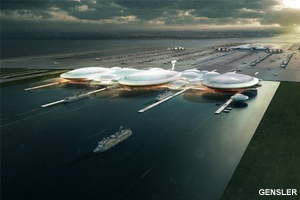 Details of how a Thames estuary airport would work have been unveiled.

The consortium behind the scheme claims it could be built within seven years.

It said the runway configuration would allow three or four aircraft to operate at the same time, 24-hours-a-day in all weather conditions.

Passenger check-in and arrival terminals would be at Ebbsfleet, next to the high speed rail link, and at King’s Cross railway station in London.

Check-in terminals would be linked to the airport by high speed rail tunnels and the estuary airport would be “car free with no private car access”.

A spokeswoman told the BBC these included demolition of houses, removal of green field sites, bird strikes, acquisition of private land and demolition of industrial infrastructure.

She said a key point was “separating people from planes” by giving passengers the benefit of air travel but without noise because all aircraft landing and departures would be over the estuary rather than residential areas.

“Most importantly it avoids flying over densely populated areas of London and the southeast, removing completely the noise contours and impact which have bedevilled millions of people throughout and around London over the past 40 years,” she said.

The consortium has said that although Heathrow would probably have to close, the opportunities for new housing, employment and economic regeneration were huge.

It said £47 billion would be recouped from the real estate value and closure of Heathrow.