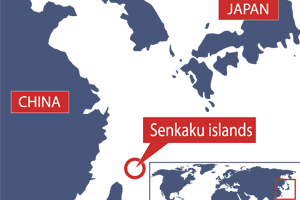 Japan’s two long-haul airlines have bowed to government pressure to ignore new Chinese flight restrictions over a disputed chain of islands in the East China Sea.

Japan Airlines and All Nippon Airways originally complied with an order on Saturday from China’s civil aviation authority for all flights planning to pass through a new “air defence identification zone” (ADIZ) to submit flight plans, or risk unspecified “emergency defensive measures.”

But the position was at odds with the Japanese government, which said it refused to recognise the unilateral imposition of a zone that overlapped with its own.

Jal and ANA said today they were no longer complying with the Chinese order and that daily flights between Japan and Taiwan, Hong Kong and southeast Asia would proceed as normal, without advance notice to China.

Neither airline reported any problems as the first flights travelled through the ADIZ, the Financial Times reported.

The change came after the US ignored Chinese restrictions and flew a pair of B52 bombers across the zone without asking Beijing’s permission in what appeared to be a direct challenge to the Chinese claim.

The Pentagon said that the flights on Tuesday were a long-planned training mission and insisted that the US would continue to operate in what it considers to be international air space.